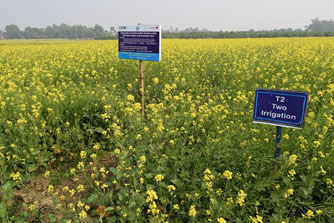 Farmers have become happy over their newly harvested mustard seed yield in the region including its vast Barind tract in the current season.

Talking to BSS here many of them said suitable climatic condition, high yielding varieties and modern technologies have supported them towards getting expected yield of the seasonal cash crop making them happy.

“I had cultivated mustard on four bigha of lands and harvested six to
seven mounds of seed per bigha on an average,” said Sabbir Ahmed, a grower of
Bijoynagar area under Godagari Upazila. He used Barisharisha-14 variety which
is high yielding than that of the conventional ones including Tory-7.

Another farmer Bachhu Mian, 45, of Amnura area in Chapainawabganj Sadar
Upazila, had brought three bigha of land under the cash crop cultivation. He
got six mounds of yield after using Barisharisha-17 variety, another newly
released high yielding variety.

Sabbir and Bachhu, the two, among many other farmers, who have become
satisfied with the harvested crop that’s acreage is gradually increasing in
the region.

Farmers in the barind tract comprising Rajshahi, Chapainawabganj and
Naogaon districts are seen cultivating two of those- BARI Sharisha-14 and
BARI Sharisha-17 varieties for the last couple of years.

“We had established projection plots on around 70 bigha of land in the
three districts this season,” Dr Shakhawat Hossain, In-charge of OFRD Barind
station, said.

He mentioned that the farmers were seen farming the cash crop on more
lands after getting repeated bumper productions with excellent price in
recent years adopting the “Short duration Aman rice-mustard-mugbean-short
duration Aus rice” cropping pattern to reap high profits.

SM Mustafizur Rahman, Additional Director of Department of Agriculture
Extension (DAE), told BSS that mustard has been cultivated on more than 1.82
lakh hectares of land in eight districts under Rajshahi division. The farmers
harvested more than 2.23 lakh tonnes of mustard seed from the farming fields
this season.

The landless and marginal farmers had brought vast tracts of the sandy
char lands under mustard cultivation this time in the Ganges basins in the
region.

The vast char (riverbed) areas on the Padma, Mohananda, Boral, Ishamoti,
Kartoa, Atrai and Jamuna and other existing rivers and their tributaries are
being considered as suitable breeding grounds of mustard seed for the last
couple of years.

He said the DAE and other agriculture related departments and banks
extended need-based supports to the farmers for making the extensive mustard
cultivation programme a total success this season.

In this regard, he also underscored the need for using the latest agro- technologies and disseminating proper knowledge to the farmers for increasing mustard seed to achieve self- reliance in edible oil to reduce the dependence on import.