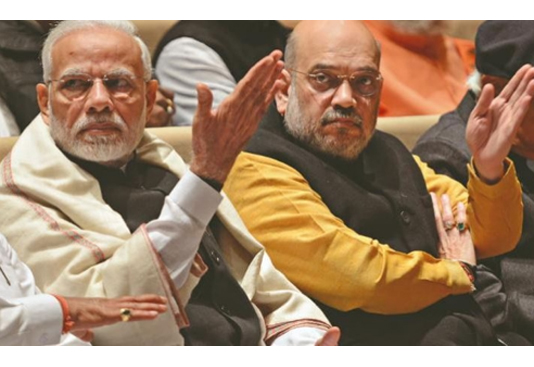 The ruling Bharatiya Janata Party (BJP) on Thursday evening declared its first list of 184 candidates for the
upcoming Lok Sabha elections. The list comes a day after the BJP’s central election panel met for the
third time to finalise names for the parliamentary polls.

According to the list, Prime Minister Narendra Modi will contest from Varanasi, the parliamentary seat which he retained after winning two seats in the 2014 election.

BJP president Amit Shah will contest from Gandhinagar, a seat where BJP
veteran LK Advani is the existing lawmaker, while Union Home Minister Rajnath
Singh will contest the elections from Lucknow and Nitin Gadkari is going to
contest from Nagpur.

Advani is not in the first list of candidates as yesterday’s list has only
184 candidates, said Union Minister JP Nadda while announcing the names of
the candidates.

However, Union minister Smriti Irani will take on Congress President Rahul
Gandhi for the second time, as she contests from Amethi. In the 2014 polls,
she lost to Rahul Gandhi from his bastion, but eventually managed to reduce
his winning margin.

Minister VK Singh will fight from Ghaziabad, parliamentarian Hema Malini
from her existing constituency Mathura and Sakshi Maharaj will contest from
Unnao.

The BJP also fielded its Tamil Nadu unit Chief Tamilisai Soundararajan from
Thoothukudi from where DMK’s K Kanimozhi is contesting.

Nadda said that 17 names have also been finalised for Bihar, but they will
be announced at a later date.

Meanwhile, the ruling BJP and main opposition Congress are involved in
massive campaign across the country to win voters heart ahead of the
election.

Prime Minister Narendra Modi kicked off the BJP’s Lok Sabha campaign from Madhya Pradesh while opposition Congress party began election campaigning from prime minister’s home state last month. The election to 543 seats Lok Sabha will be held in seven phases beginning on April 11 while votes will be counted on May 23.