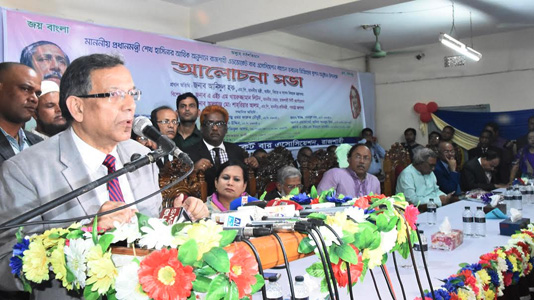 He said the issue of establishing rule of law is very much important to Prime Minister Sheikh Hasina.

The law minister was addressing a view-sharing meeting with lawyers at Advocate Bar Association auditorium after laying foundation stone of its multistoried building here today as chief guest.

Anisul Haque said salary of judicial officials has almost been doubled. A project has been adopted for construction of multistoried buildings for Chief Judicial Magistracy and District Judge.

He also said the government has taken all-out measures to reduce the burden of pending cases.

After the meeting, Anisul Haque talked to the journalists and said Begum Khaleda Zia must be released through legal process not through any movement.

He reiterated that Begum Zia has been convicted on charge of her criminal offense of stealing orphans money and the lower court verdict has been upheld by higher court. The government has nothing to do in this regard, he added.