All disabled to get allowances from next budget: PM 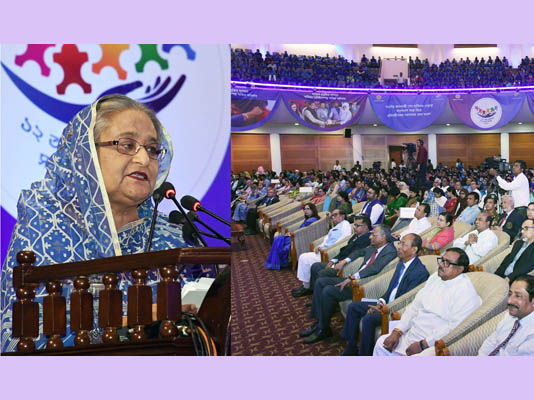 Prime Minister Sheikh Hasina today announced that the government would arrange allowances for all the differently able people from the next budget.

“Insha Allah, we will arrange allowances for all the differently able people from the next budget,” she told the inaugural function of the 12th World Autism Awareness Day at Bangabandhu International Conference Centre (BICC) here this morning.

Currently, 10 lakh disabled people are getting allowance of Taka 700 per month from the government, she said and added that according to the latest census there are 14 lakh such persons in the country.

The premier said whatever might be the number all the disabled people, including mentally and physical challenged, autistic and others, will be brought under the coverage of allowance from the next budget, she affirmed.

She called upon all particularly the affluent people to stand beside the disabled and provide them with necessary assistances, including financial aid and jobs at their organizations, to ensure their meaningful livelihood and flourish their hidden talents.

Stressing the need for changing mindset of the society, she said, “We should not consider disabled people as burden of the society. They have also the right to leading meaningful lives and we the people having sound health should fulfill their rights.”

No more negligence to be shown to them, she also said.

Requesting the parents for putting in effort to integrate them into the mainstream society brushing aside shyness about their children’s physical and mental barriers and asked them to spend more times with their children.

She mentioned that they have numerous talents which are absent among many people with sound health. “We’ll have to create a scope for them in all walks of lives including family, society, educational institutions and their workplaces to flourish those talents,” she added.

On behalf of the people with autism, a SSC examinee also addressed the function.

At the function, Sheikh Hasina handed over awards to five children with autism in recognition of their contribution to different fields and three individuals and three organisations for their role in building awareness about autism.

The premier joined a photo session with the award recipients and also lit the blue light at the function.

The day is being observed in the country as elsewhere across the globe with the theme –“”Assistive Technology, Active Participation.”

The United Nations General Assembly declared April 2 as World Autism Awareness Day to highlight the need for enhanced initiatives by all to improve the lives of children and adults who suffer from autism.