Finland for continuing int’l pressure on Myanmar for Rohingya repatriation 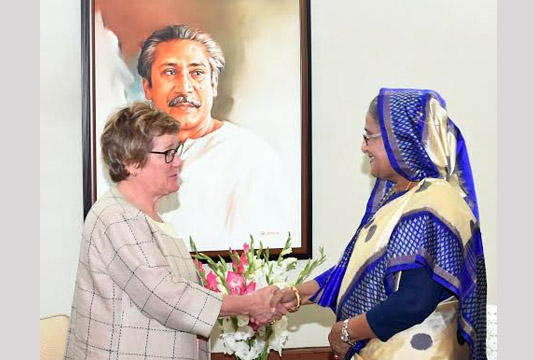 Non-resident Ambassador of Finland to Bangladesh Nina Vaskunlahti today called for continuing international pressure on Myanmar to take back its Rohingya nationals from Bangladesh.

“The world community will have to keep up pressure on the Myanmar government to take back their citizens from Bangladesh,” she said.

The ambassador made this remark when she paid a courtesy call on Prime Minister Sheikh Hasina at her official Ganabhaban residence here this afternoon.

Referring to the influx of over 10 lakh Rohingyas into Cox’s Bazar, the prime minister said they have outnumbered the local people.

“The local people have accepted their sufferings in the interest of the humanity,” she said.

The Finish envoy congratulated Sheikh Hasina on her party’s landslide victory in the last general election and her assumption of office as the prime minister for the fourth time.

“Bangladesh’s economy is progressing fast under your dynamic leadership,” she told the premier.

The Finish ambassador expressed her country’s interest to invest in Bangladesh’s textiles and energy sectors. “We want to produce electricity in Bangladesh from wastes,” she said.

Vaskunlahti also said Finland is keen to extend cooperation to Bangladesh in the fields of education and information technology (IT).

She mentioned that many Bangladeshi students are studying in Finland.

Expressing satisfaction over the existing bilateral relations, the Finish envoy said the foreign office consultation between the two countries will be held in May.

Pointing out that Bangladesh is producing high quality leather and leather goods, the prime minister said Finland can import these products from here.

Sheikh Hasina said the main aim of her government is to develop the country further. “We’re putting our best efforts to fulfill the basic needs of the people,” she said.

“The purchasing capacity of the people has increased to a great extent due to our strides,” she said.

The prime minister said the government has adopted Delta Plan-2100 with the cooperation of the Dutch government to build a beautiful abode for future generations.

Referring to the implementation of the historic land boundary agreement (LBA) with India, the prime minister expressed gratitude to the Indian government and all political parties of India in this regard.

“All political parties of India lent their supports to the LBA Bill in unison in parliament,” she said.

In this connection, the Indian defence secretary said he was involved with the process of preparing the agreement.

The Indian defence secretary pointed out defence cooperation between the two countries.