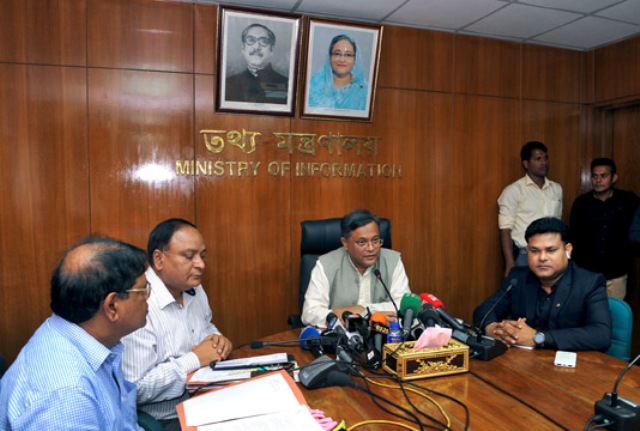 Hasan said, “We have discussed with Association of Television Channel Owners (ATCO) to prepare a list of private television channels as per getting serial of licenses. Cable operators must follow the list for airing TV channels.”

“Digitization has become visible in all spheres of the society. But cable
networks are not digitized. Digitization of cable network is urgent for the
development of broadcasting sector,” the information minister added.

There are 6,000 cable operators in the country, he said adding, they
(cable operators) have vital role in airing both local and foreign channels.

The two distributing organization must abide by the law to run their
businesses, he said, adding legal actions will be taken, if they violate the
law.

Hasan, also the publicity and publication secretary of the ruling Awami
League, said the government has given around 44 licenses for private TV
channels. Of those, around 33 channels are now running, he added.

There are legal restrictions in some countries including the UK, India
and Pakistan as well as in European continent on airing foreign
advertisements, he said, adding if any television in the UK airs foreign
advisement, it must pay taxes and fulfill conditions of their laws.

Members and leaders of Cable Operators Association of Bangladesh, among
others, were present at the meeting.