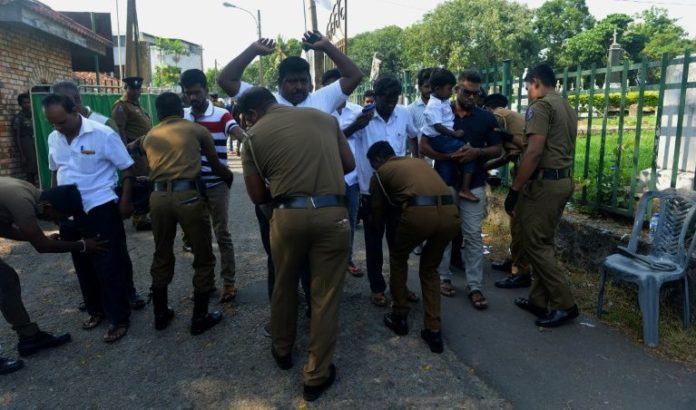 Brigadier Sumith Atapattu said the army increased its deployment by 1,300 to 6,300, with the navy and airforce also deploying 2,000 more personnel.

“We are armed with powers to search, seize, arrest and detain under emergency regulations,” Atapattu told AFP. “We are involved in static guard duties, patrolling and helping with cordon-and-search operations.”

The government also announced a ban on all drone flights and said licences issued to all commercial operators were suspended with immediate effect. Police said they arrested another 16 suspects overnight with alleged ties to the National Thowheeth Jama’ath (NTJ) extremist group accused of the blasts at three churches and three luxury hotels.

Police said about 75 people were now being interrogated in connection with the deadliest attack against civilians in the country’s history. Sri Lankan authorities are also investigating a security failure to act on prior information about the impending Easter bombings by the NTJ.

President Maithripala Sirisena, who is also the minister of defence and law and order, on Tuesday vowed a major security shake up with pledges to remove the heads of the police and armed forces “within 24 hours”, but there
were no changes by Thursday morning.

Recriminations have flown since Sunday’s attacks and the country remained tense with many shops and offices closed and motorists staying off the roads.

Sirisena is due to meet with leaders of all political parties as well as religious leaders in two separate meetings on Thursday to discuss the situation. Sunday’s bomb attacks were the first in the country since the Tamil insurgency ended almost 10 years ago in May 2009.