People are ‘maalik’ in democracy: Rahul 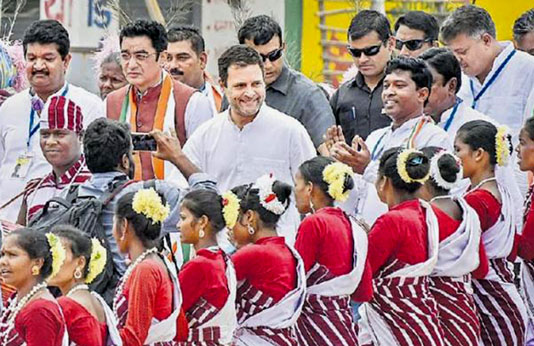 People are the ‘maalik’ (masters) in democracy, Congress president Rahul Gandhi said Thursday, asking them to tell his party’s government what to do and it will be done.

Addressing an election rally here on Thursday , Gandhi said, if voted to power, the Congress will ensure that Rs 72,000 is deposited every year into the bank accounts of families that earn less than Rs 12,000 every month, covering five crore households.

“Don’t forget that your are the ‘maalik’ in democracy.

Narendra Modi, or for that matter any other leader, is not your master. You just tell us what to do and we will do it,” he told the rally.

Gandhi said the alliance (mahagathbandhan), of which the Congress is a constituent, listens to the voice of people.

“I have not come to speak out our ‘mann ke baat’ but listen to yours,” he said, obviously targeting Prime Minister Narendra Modi over his monthly radio programme ‘Mann ki Baat’ during which he spoke his mind on topical issues.

Gandhi said if voted to power, the Congress will introduce free treatment to the poor in hospitals and set up technical institutions in districts to create a large base of skilled workforce.

He appealed to electors of Khunti Lok Sabha seat to vote for Kalicharan Munda of the Congress who is pitted against BJP’s Arjun Munda, a former chief minister.

The Congress president attacked the prime minister for not waiving farm loans despite the agrarian distress, and alleged that Modi’s government only benefited 15-20 industrialists close to it.

The Congress leader said his party was committed to ensuring that the land of tribals was not taken away.

He also assailed the Centre over alleged slip-shod implementation of the GST, which he claimed, hit the poor hared.