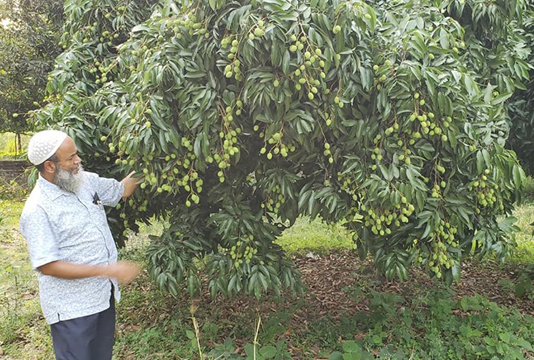 The litchi tresses here taken a greenery look with its huge tender fruits which made the farmers and businessmen very much optimistic about the possibility of bumper production of the mouth-watering seasonal fruit this season.

Litchi growers are passing very busy times in caring the trees as well as the orchards as huge green tender litchis have grown in the region this year, turning the tree branches into greenery fresh look.

Talking to BSS here today, Dr Alim Uddin, Principal Scientific Officer of Fruit Research Station, said the local varieties of litchi will start appearing in the markets within next couple of days. But, the Bombay variety is expected to come to the markets by last week of this month.

He said many people are getting benefits by growing litchi as China-3 (hybrid), Bombay and Madras are the most popular varieties in the region. Paba, Godagari, Charghat, Bagmara, Bagha, Puthia and Durgapur upazilas of the district are well-known for producing good quality litchis.

Dr Alim mentioned that the region witnessed sufficient rain for the last couple of days which saved the cash crop from scorching heat and sultry weather.

Although the region experienced hailstorms during the flowering period, but it did not cause much harm, he said, adding that if the weather condition remains favorable for the next one month, litchi cultivators of the district would be benefitted greatly.

Abdur Razzaque of Kapasia village said all of his 30 litchi trees on one bigha of land bloomed in abundance this year and there are a large number of ‘guti’ (young litchi) on the branches.

He said commercial litchi farming has started at Raipara, Bulanpur, Chhotobongram and Katakhali areas of the city. Besides, litchi is also being cultivated at Baghmara, Durgapur, Puthia, Paba and Godagari upazilas of the district, he added.

Local farmers said they are taking great care of their litchi plants by spraying medicines. Last year, many litchis were damaged due to storm and the farmers incurred losses. But this year they are hoping to recover the losses.

There are more than one hundred litchi orchards in the region including its Barind tract. Apart from this, high yielding China-3, Bombay and Madrazi variety litchis are also being cultivated on homestead lands. Additional Director of DAE Dev Dulal Dhali said many people became self- reliant by cultivating litchi in recent years.

He said there are hundreds of litchi orchards on more than 1,000 hectares of land that produces huge yield which meet the local demand as well as being consigned to other parts of the country every year.