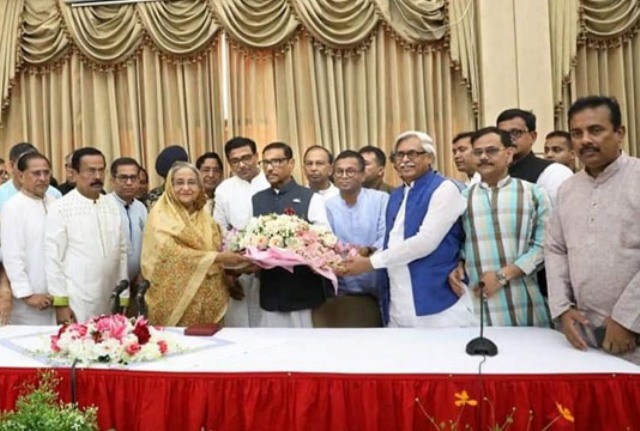 The homecoming day of Prime Minister and Awami League President Sheikh Hasina was observed today across the country in a befitting manner.

On May 17 in 1981, she returned home after a long exile following the brutal assassination of her father Bangabandhu Sheikh Mujibur Rahman, the architect of independent Bangladesh and most of family members on August 15,
1975.

An aircraft of Indian Airline carrying Sheikh Hasina from New Delhi via
Kolkata, touched the runway of the then Dhaka Kurmitola Airport at 4.30 pm.

A discussion was organized at Institution of Engineers, Bangladesh (IEB)
with AL Presidium Member Begum Matia Chowdhury in the chair.

The homecoming day of Sheikh Hasina was also observed in Chattogram amid
different programmes.

Chattogram City AL organized a discussion at the party office at Darul
Fazal Market this morning.

Similar programmes were also arranged at district and upazila levels across
the country.

Father of the Nation Bangabandhu Sheikh Mujibur Rahman along with his
family members was brutally killed on August 15, 1975. Luckily his daughters,
Sheikh Hasina and Sheikh Rehana, who were in Germany at that period, became
the survivors.

On her return home in 1981, Sheikh Hasina told a huge mass gathering at
Manik Mia avenue: “I have come to stay beside the people of Bangladesh. I
have not come to be the leader of Awami League. I want to stay beside you as
your sister, as your daughter, and as a worker of Awami League, who believes
in the ideals of Bangabandhu.”

These were the first public remarks of Sheikh Hasina on her return home.