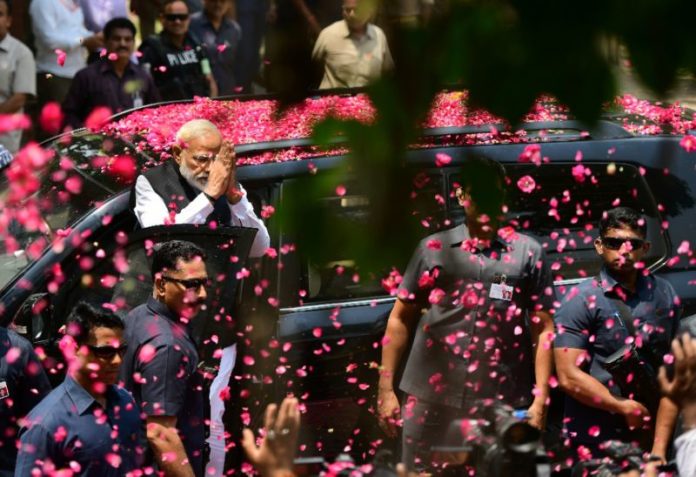 Voting in India’s election, the world’s biggest ever, ends on Sunday after an acrimonious and at times violent campaign awash with insults, fake news — and lots of petals.

From Goa’s beaches to Mumbai’s slums and Ladakh’s Himalayan monasteries, some 900 million eligible voters have had the chance to exercise their democratic right over the past six weeks.

The enormity of 1.3-billion-strong India and its electorate, and the security and logistical challenges, meant there had to be seven different voting days across 1.1 million polling stations starting on April 11.

Four million electronic voting machines have criss-crossed the country, traveling to far-flung locations — sometimes by elephant and camel — to reach a handful of voters.

All the votes will be counted on a single day, with the voting machines stored in strongrooms with guards and CCTV watching every move before the process begins on Thursday.

If there is a clear trend, this should be discernible by around midday (0630 GMT) that day.

Modi has done 142 rallies across India, and sometimes five per day. Around a tonne of rose petals were used in one roadshow alone, not counting tricoloured garlands, the Times of India reported.

On Saturday the 68-year-old Hindu nationalist embarked on a spiritual break, dressed in a long robe and saffron sash as he trekked to a Himalayan shrine to meditate, with images showing him seated on a bed inside a holy cave in the country’s north.

Hoping to become the fourth member of Nehru-Gandhi dynasty to lead India, Rahul Gandhi of the opposition Congress party has struggled to make himself heard above the din of the BJP’s campaign juggernaut.

The Delhi-based Centre for Media Studies estimates that the outlay on this election could top $7 billion, making it one of the priciest contests globally — with the lion’s share of the spending by the BJP.

Lots of it has been spent on social media, with the parties using armies of “cyber warriors” to bombard India’s hundreds of millions of Facebook and WhatsApp users with messages.

Fake news and doctored images have abounded, including of Gandhi and Modi having lunch with Imran Khan, prime minister of arch rival Pakistan, or of a drunk Priyanka Gandhi, a politician and the sister of Rahul.

Violence has also broken out. Maoist rebels opposed to the Indian state killed 15 troops and their driver in the western state of Maharashtra on May 1, the latest attack in a decades-long insurgency.

Clashes between rival political supporters erupted last week in the key eastern state of West Bengal where the BJP hopes to make inroads to compensate for expected losses in Uttar Pradesh, the most populous state.

Gandhi, 48, has tried several lines of attack against Modi, in particular over alleged corruption in a French defence deal — he calls Modi a “liar” — and over the plight of farmers and on the economy.

Modi’s government has fallen short on creating jobs for the million Indians entering the labour market every month, the shock introduction of a cash ban in 2016 caused huge disruption to livelihoods, and Indian banks are gasping under bad debts.

Lynchings of Muslims and low-caste Dalits for eating beef, slaughtering and trading in cattle have risen during Modi’s tenure, leaving some of the country’s 170 million Muslims feeling threatened and anxious for their future.

But Modi has managed since the latest bust-up with Muslim-majority Pakistan in February to deflect the attacks of “pappu” (“fool”) Gandhi and portray himself as India’s “chowkidar” (“watchman”).

“Modi is the only leader who thinks about us Hindus. He is our pride. He is the only saviour of Hindus,” Bibha Sandwar, a school principal, 50, told AFP at a recent rally in Delhi.