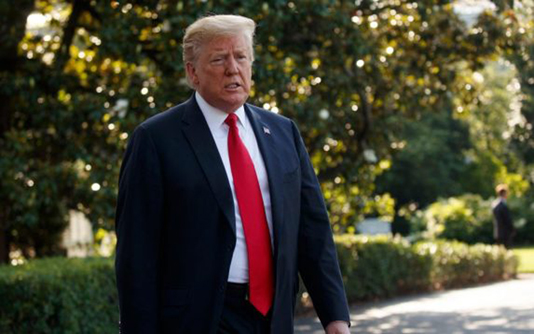 US President Donald Trump renewed his threat Monday to impose tariffs on Mexico as controversy erupted over what exactly is in the countries’ new migration deal, which the Mexican government admitted would be reviewed in 45 days.

Trump reignited the pressure three days after granting a reprieve from tariffs that he had threatened to apply from this week to force the major US trading partner to boost measures against illegal immigrants trying to enter the United States.

In a series of statements and tweets, Trump alluded to still-secret provisions in the deal that he said would need approval by the Mexican Congress.

“If for any reason the approval is not forthcoming, Tariffs will be reinstated!” he tweeted.

Faced with a surge of Central American immigrants fleeing poverty and gang violence, Trump had already declared a national emergency in an effort to build his promised border wall with Mexico, and had also more than once threatened to shut the frontier before mooting the tariffs.

The president did not go into details Monday, but Mexico said it had agreed to discuss one of Trump’s top demands, a so-called “safe third-country agreement” — in which migrants entering Mexican territory must apply for asylum there rather than the US — if the flow of undocumented Central Americans continues.

Foreign Minister Marcelo Ebrard, who led the Mexican negotiating team in Washington last week, said he had rebuffed the US demand for such a measure, but agreed to revisit the matter in 45 days.

“In the meeting with the vice president of the United States, they were insistent on the safe third-country issue,” Ebrard told a press conference.

“We told them — I think it was the most important achievement of the negotiations — ‘let’s set a time period to see if what Mexico is proposing will work, and if not, we’ll sit down and see what additional measures’” are needed, he said.

Told by reporters at the White House that Mexico has not confirmed its legislature will vote on the unspecified further measures, Trump answered: “I don’t think they’ll be denying it very long.”

Under the deal, Mexico agreed to bolster security on its southern border and expand its policy of taking back asylum-seekers as the United States processes their claims.

Trump angrily rebuffed criticism over a New York Times report that said the main terms of the deal were not new, and had in fact been agreed on months before his tariff threat.

Secretary of State Mike Pompeo sidestepped controversy, instead praising Mexico and highlighting what he said was an example of “diplomacy at its finest.”

“It’s the biggest effort to date that the Mexicans have committed. It’s something that we pressed for,” he said. “We will work closely with them to make sure that that is a successful effort.”

Trump’s tariffs were to start at five percent Monday and rise incrementally to 25 percent by October.

Economists had warned the pain of those threatened levies and Mexican retaliatory measures would have been acute for both countries, with potentially global spillover.

Markets were relieved over the deal struck Friday.

But what is known of the agreement has drawn criticism from human rights groups who condemn what they call a Draconian crackdown on migration and the criminalization of immigrants.

And as the contours of the deal continued to come to light, it appeared to grant Mexico only a temporary reprieve — with confusion surrounding key elements.

Ebrard said Friday that the promised deployment of 6,000 officers from Mexico’s newly created National Guard to the southern border would begin Monday.

However, he appeared to backtrack Monday, saying the deployment would happen “as quickly as possible.”

There was no sign of a new deployment in Tapachula, the entry point for the migrant caravans that have crossed Mexico in recent months, AFP correspondents said.

Local officials said the federal government had indicated the new deployment could take around a week. In the meantime, it has sent 400 federal police reinforcements to the border, they said.

Ebrard also denied the deal contained anything on Mexico buying US farm goods, after Trump tweeted Saturday that “MEXICO HAS AGREED TO IMMEDIATELY BEGIN BUYING LARGE QUANTITIES OF AGRICULTURAL PRODUCT FROM OUR GREAT PATRIOT FARMERS!”
In a further sign that the deal is a work in progress, Ebrard said Mexico and the US would hold talks with Guatemala, Panama, Brazil and the UN refugee agency on additional measures to control migration, because the solution “has to be regional.”