Call to make vitamin ‘A’ plus campaign successful 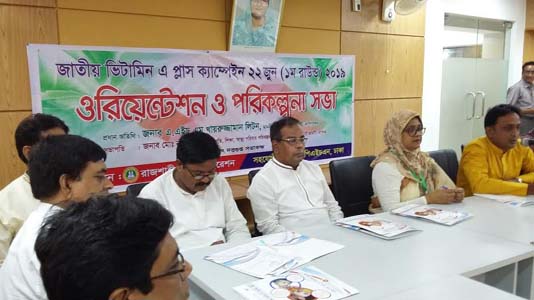 Experts at a city level advocacy meeting here have urged all the officials and others concerned to make the forthcoming June 22 National vitamin ‘A’ plus campaign-2019 (first round) a total success to address vitamin deficiency disorders and syndromes among babies.

They said vitamin ‘A’ supplement is essential for the normal functioning of the visual system, maintenance of cell function for growth, red blood cell production, immunity and reproduction.

The supplementation is also important for substantial reduction of death rate caused by diarrhea and measles, they said.

Besides, various problems including eyesight and night blindness could be prevented and cured through successful implementation of the campaign, they added.

Rajshahi City Corporation (RCC) organised the advocacy and planning meeting in association with Institute of Public Health Nutrition (IPHN) and World Health Organization (WHO) at its conference hall ahead of the campaign yesterday.

During his keynote presentation, Surveillance Immunization Medical Officer of WHO Dr Nurul Islam said the vitamin ‘A’ plus supplement is helpful for reducing the severity and duration of illnesses associated with pneumonia and diarrhea.

Referring to the WHO guideline, he said children should begin vitamin ‘A’ supplement at the age of six months.

Around 7,937 children aged between six months and 11 months will be given blue-coloured capsule of high powered Vitamin A and 54,731 children aged between one year and five will be given red-coloured capsule of high-powered Vitamin A. The programme will be conducted in 384 centres including 343 permanent and 41 mobile ones in the city.