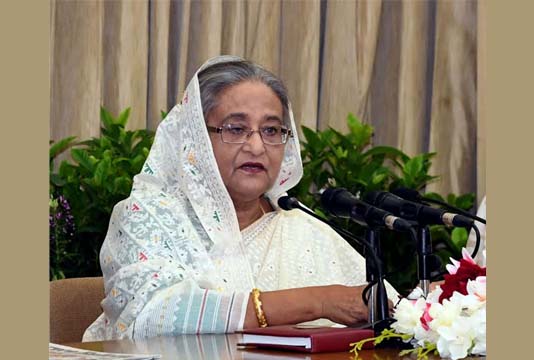 The prime minister was addressing the 33rd founding anniversary function of the elite force at its Officers’ Mess in Tejgaon in the capital. SSF Director General Major General Mazibur Rahman delivered the welcome address and gave an overview on the activities of the force.

Ministers, PM’s advisers, the chiefs of the three services, secretaries concerned to the premier and high civil and military officials were present at the function.

Keeping this in mind, she added, the government is procuring necessary equipment for the force and imparting time-befitting training to its personnel.

The prime minister said in the present era of science and technology, new technologies are being invented and their use is increasing.

She said it is true that the new technologies are improving the living standard of the people and accelerating the pace of development.

“But various risks appear for the innovation of new technologies, and these technologies create an scope for those engaged in militancy and terrorism as well as anti-social activities,” she said.

Sheikh Hasina said all concerned, including the SSF, will have to have expertise and be up-to-date to fight these crimes.

“We’ll have to remain alert so that we can use modern technologies in good work and take actions against their misuse,” she said.

Pointing out that the government launched Bangabandhu Satellite and is implementing a number of mega projects like the Padma Bridge and the Rooppur Nuclear Power Plant, she said: “We’ve taken such schemes by facing various challenges.”

The prime minister said there will be a conspiracy of the anti-liberation force and those who did not extend support to Bangladesh internationally. “But we’ll have to remain prepared and aware to thwart such a plot,” she said.

“We’ve to stay alert so that the blood of millions of martyrs never go in vain and nobody forgets the history of our victory and we can take the country forward further and brighten its image more,” she continued.

About the spread of drugs, Sheikh Hasina said the government is taking steps to free the society from this menace.

“It’s seen that if we stop one kind of drug, another type of drug is invented. However, we’re taking proper actions against this,” she said.

Highlighting the country’s stunning development in various fields, the prime minister said it has been possible as the people and law enforcement agencies tackled militancy, terrorism and political violence with efficiency and sincerity.

Lauding the role of the SSF in ensuring security of the very important persons (VIPs), Sheikh Hasina said the elite force has been performing their responsibilities with efficiency and integrity for the overall security of the VIPs of the state and other VIPs declared by the state, for 33 years.

In Bangladesh’s political context, she said, because of conspiracy of the anti-liberation forces and international terrorism, the issue of security of the VIPs is very important and challenging.

“Overcoming the challenge and barriers, the SSF members, since the establishment of the force, are showing their solid mental strength, loyalty and high professionalism,” she added.

The premier said all of the heads of state and government who have so far visited Bangladesh highly praised the efficiency and professionalism of the force. “This makes me happy and proud,” she said.

She expressed her firm belief that the members of the force will continue to discharge their duties with utmost professionalism by upholding their loyalty and sense of responsibility.

“I hope that the way the force is developing as an ideal security force, it will continue to be developed to brighten the image of the country and the nation,” she said.