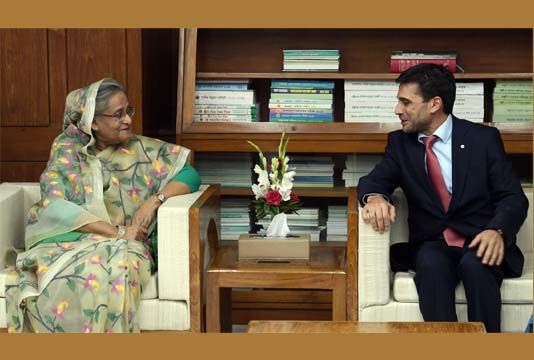 “We want the international organisations to be active for repatriation and rehabilitation of the Rohingya nationals so that they can go back to their homeland,” she said when Head of Delegation of ICRC in Bangladesh Ikhtiyar Aslanov paid a farewell call on her at her Jatiya Sangsad Office here this evening.

The prime minister said the local people of Cox’s Bazar are suffering most due to the exodus of over 11 lakh Rohingyas there.

Putting emphasis again on repatriation of the Rohingyas, she questioned that how long Bangladesh will bear their burden?

The ICRC head of delegation assured that his organisation will continue to support Bangladesh on this issue.

He highly appreciated Prime Minister Sheikh Hasina for her wise decision and humanitarian gesture of giving shelter to the Rohingyas.

“Bangladesh people are resilient,” he said, adding both the government and people came forward to look after the Rohingyas.

Ikhtiyar Aslanov told the prime minister that, “Your approach was very wise and good for solution to the protracted Rohingya crisis by engaging Myanmar.”

In this connection, Sheikh Hasina said Bangladesh has signed agreements with Myanmar for repatriation of the Rohingyas. “But the Myanmar authorities are yet to act in this regard,” she said.

Sheikh Hasina said all international organisations including ICRC have come forward to the help of the Rohingyas.

In this connection, the premier said it was Father of the Nation Bangabandhu Sheikh Mujibur Rahman who first started construction of cyclone shelters in coastal areas of the country after independence.

“The Father of the Nation initiated for creating volunteers and building cyclone shelters named ‘Mujib Kella’ to combat natural disasters,” she said.

Mentioning the 1991 severe cyclone, Sheikh Hasina said before the then government acted, “My party men first reached to the distressed people and started relief operations.”

The ICRC head of delegation expressed gratitude to the government and the prime minister for extending support to him during his tenure in Bangladesh.