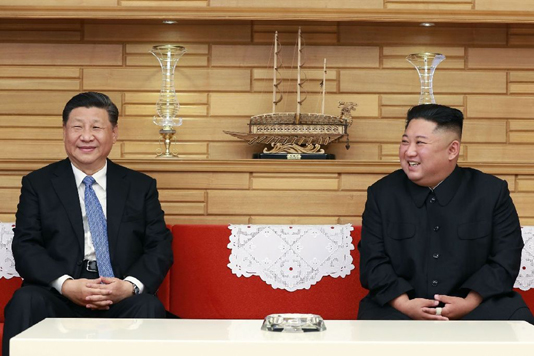 Kim said Xi’s visit was an “important opportunity” for the two countries to boast their “invincible” and “unchangeable” friendship to the world, the official KCNA news agency reported. The streets of Pyongyang were filled with cheers and “friendly affection” for Chinese citizens who have “shared joys and sorrows” with North Koreans while pursuing socialism, it added.

Xi is the first Chinese president to visit North Korea in 14 years, after relations between the Cold War-era allies deteriorated over Pyongyang’s nuclear programme and Beijing’s subsequent backing of UN sanctions. But as he embarked on a flurry of diplomacy last year, Kim ensured that Xi — the leader of his country’s key diplomatic supporter and main provider of trade and aid — was the first head of state he met.

The timing of Xi’s visit is likely to raise eyebrows at the White House as it comes one week before the G20 summit in Japan, where Trump expects to meet with Xi to discuss their protracted trade war. Analysts say that Xi’s journey is intended as a signal to Trump of his influence and backing for Kim.

At a time when “serious and complicated changes are happening in international and regional situations”, the two leaders exchanged “extensive views on important and regional matters including the situation of the Korean peninsula”, KCNA reported of the summit meeting.

“The talks proceeded in a comradely, sincere and candid atmosphere and brought about common understanding of discussed issues,” it said, adding Kim and Xi agreed on “making positive joint efforts to promote close strategic communication” and deepen “mutual understanding”.

The two also agreed to continue exchanging high-level visits among their officials and strengthen cooperation “in every field”, the agency reported.

The North Korean outlet, however, did not report on Kim’s remark that he was “willing to be patient” in continuing stalled nuclear talks with the US, which was reported by the Chinese state broadcaster CCTV.