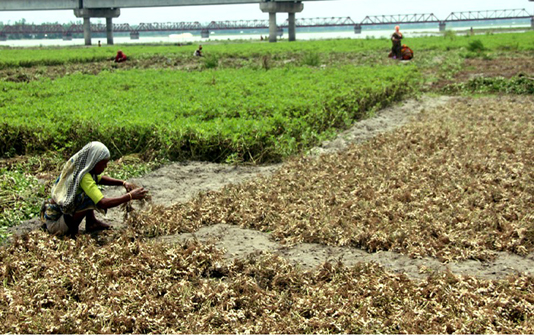 Bumper ground production is expected in Rangpur region as farmers have already started harvesting of the crop during the current season.

Officials of the Department of Agricultural Extension (DAE) said farmers are getting fair price of harvested groundnut with price ranging of Taka 2,000 to 2,400 per mound (40 kilograms) in local markets.

The DAE has fixed a target of producing 6,940 tonnes of groundnut from 4,082 hectares of land for all five districts of Rangpur, Gaibandha, Kurigram, Nilphamari and Lalmonirhat in the region during this Kharip-1 season.

“However, farmers have cultivated groundnut on 4,527 hectares of land exceeding the farming target by 445 hectares of land or 10.90 percent,” Horticulture Specialist of the DAE at its regional office Agriculturist Khondker Md. Mesbahul Islam said today.

Talking to BSS, farmers of different villages, including char and riverside areas, in different upazilas of the region expressed happiness over excellent production of groundnut crop this season.

Farmer Mohammad Sayeduzzman of Char Biswanath village in Kawnia upazila of Rangpur said he has changed fortune through groundnut cultivation on sandy barren char lands though he had no land.

He has purchased 17 acres of land in last 20 years and is leading a solvent life with his family members.

Farmer Noor Ali of Char Biswanath village in the upazila said he has cultivated groundnut on 90 decimals of land during this Kharip-1 season spending Taka 16,000.

“I have started harvesting groundnut now and expecting to get total production of 22 mounds,” he said hoping that he would earn a net profit of Taka 35,000.

Farmer Mohammad Dudu of Char Gonai village said he has cultivated groundnut on 2.50 acres of land spending around Taka 45,000.

“I am hopeful to get production of over 70 mounds of groundnut and earn a net profit of Taka one-lakh this season,” he said.

Like these farmer, many growers of different char villages and riverside areas of the region have achieved solvency through groundnut cultivation.

Kawnia Upazila Agriculture Officer of the DAE Agriculturist Saiful Islam said local farmers and char dwellers have cultivated groundnut on over 600 hectares of land in the upazila, mainly in sandy and riverside char areas.

He said a farmer generally spends about Taka 18,000 for farming groundnut on one acre of land and net profit stands at Taka 45,000 on an average.

Additional Director of the DAE for Rangpur agriculture region Agriculturist Muhammad Ali said many farmers, mainly of char areas, have achieved self-reliance by cultivating groundnut twice annually during the Rabi and Kharif-1 seasons in the region.

“Cultivation of groundnut is increasing every year as it has become profitable crop… The groundnut has a huge demand in different food industries,” Ali added.