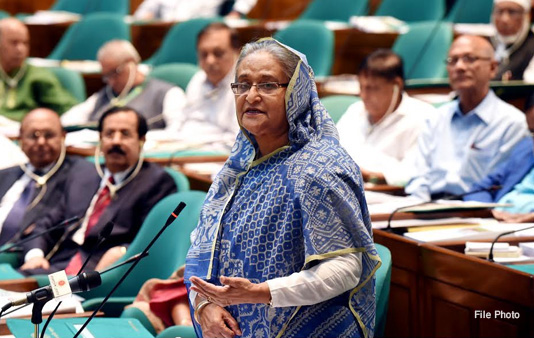 Prime Minister and Leader of the House Sheikh Hasina today informed the Jatiya Sangsad that her government has set a target of creating 1.50 crore employments in the next five years.

“Yes, it’s true that our government has set a goal of creating 1.50 crore employments in the next five years,” she said in reply to a starred question from treasury bench member M Abdul Latif (Chattogram) during her question hour in the House.

The prime minister said on the basis of the strategies and targets of the seventh five-year plan (2016-2020), the present government has taken various steps to turn young generation into a human resource.

“The initiatives were also taken to create employment by removing unemployment,” she said.

The Leader of the House said the steps included establishment of the National Skill Development Authority under the Prime Minister’s Office and setting up Employment and Manpower Office in 64 districts including four divisions.

Sheikh Hasina said projects have been taken to establish 100 technical schools at upazila level and introduction of double shifts in the existing technical schools, colleges and polytechnic institutions.

The Leader of the House said a government polytechnic institute will be set up in each district and one technical school and college will be established in each of 389 upazilas.

The premier said under the seventh five-year plan, 12.9 million additional employments will be created which include two million employments for the expatriate workers.

“It’s expected that the present trend of employment for the expatriate workers will continue,” she said, adding that 8.80 lakh workers from Bangladesh went abroad in the FY 2017-18.

Sheikh Hasina said about 20 lakh youths enter the labour market every year for employment. Creating employment for this huge population is a challenging task, she said.

“So, the Awami League government has been working untiringly to ensure better life of the people by creating adequate employment through massive industrialization,” she said.

The Leader of the House said, Bangladesh Economic Zones Authority (BEZA) has taken initiatives to establish 100 economic zones by 2030 in all potential areas of the country.

Sheikh Hasina said she inaugurated the development activities of 13 economic zones and opened 11 economic zones which are suitable to setup industries on April 3 last.

“In these zones, employment for 30,000 people has already been generated,” she said.

The Leader of the House said the selection of the sights for establishing 88 economic zones in different districts has already been completed. “With the completion of 100 economic zones, direct and indirect employment will be created for nearly 1 crore people,” she said.

The prime minister said employment for 3,05,242 people was created in the export processing zones(EPZs) in the last 10 years.