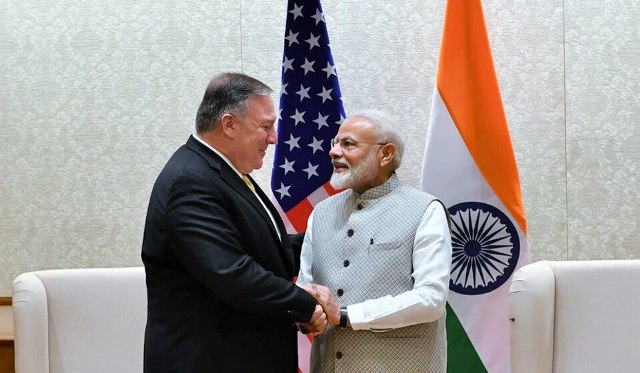 US Secretary of State Mike Pompeo hailed on Wednesday Indian Prime Minister Narendra Modi’s “wonderful” re-
election, vowing both sides will overcome a number of spats that have dogged relations under President Donald Trump.

“I am confident that we have the benefit of building on a strong foundation between two of the world’s great democracies. We saw this in the election, we saw this incredible democratic vigour lead to a wonderful outcome,” Pompeo said after meeting Modi in New Delhi.

As a democratic heavyweight in a region dominated by authoritarian China, India is a natural US bedfellow but Trump has irked New Delhi with measures aimed at reducing the trade imbalance under his “America First” mantra.

Washington in turn is unhappy at what it sees as India’s well-developed protectionism, often expressed through tariffs and red tape that makes life difficult for US firms competing in the huge market of more than a billion consumers.

With Trump calling India the “tariff king”, Washington has refused to exempt India from higher steel and aluminium tariffs and has ended India’s preferential trade status that allowed the Asian giant to send America $6 billion in goods duty-free every year.

India retaliated earlier this month with tariffs on 28 items imported from the US, including almonds, apples and walnuts — products close to the hearts of voters in Trump’s rural base.

But Pompeo — preparing the groundwork for talks between Modi and Trump at the G20 in Japan later this week, when the president’s myriad trade battles will loom large — suggested relations could be fixed.

“There are tariffs and counter-tariffs and we said we’re going to do our best to make sure that all the right people get in all the right places and work through these problems, so that we can get out of this and get on with
the business of growing each of our two economies,” Pompeo told a news conference.

This was echoed by Indian Foreign Minister S. Jaishankar, who said he was “optimistic about where our economic relationship is going”. But he appeared to stick to India’s guns that it intended to buy the S-400 missile defence system for $5.2 billion from Russia despite the threat of US sanctions slapped on countries buying Moscow-made military kit.

Russia has long been a major arms supplier to India, but New Delhi’s use of its hardware complicates US efforts to bolster regional security cooperation to counter China, as well as its push to pressure the Kremlin. “I think Secretary Pompeo knows, and I have explained to him in some detail, we have many relationships with many countries… We will do what is in our national interest,” Jaishankar said.

He also said Pompeo was “receptive” to Indian worries that any US-Iran conflict might interrupt the flow of oil from the Middle East and endanger the large Indian diaspora there.

Pompeo “understands that this is today the world’s fifth-largest economy, which imports 85 percent of its energy, a large part of it from the Gulf… He gets what our interests are,” Jaishankar said. “We all know that we need to keep that waterway open,” Pompeo said, referring to the Strait of Hormuz.

“And we also know that Iran is the world’s largest state sponsor of terror. We know how the Indian people have suffered from terror around the world.”