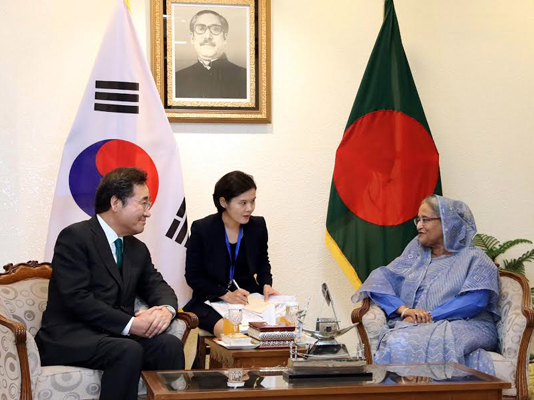 Prime Minister Sheikh Hasina today urged her visiting South Korean counterpart Lee Nak-yon to engage with Myanmar for an early peaceful solution to the Rohingya crisis saying it posed a threat to regional stability and peace.

“The displacement of Rohingyas from Myanmar to Bangladesh has posed risks to peace and stability of our region,” Bangladesh premier’s press secretary Ihsanul Karim quoted her as saying during the talks with Lee Nak-yon.

She said Dhaka expected Korea to “engage with Myanmar for an early peaceful solution to the crisis” and insisted that sustained international pressure and engagement were needed to substantiate Bangladesh efforts.

Karim said the South Korean premier in reply said “”Anything we can do we’ll do”.

He said the two premiers led their respective sides in the 40-minute meeting at the Prime Minister’s Office when issued of trade, commerce, investment, technical cooperation and the Rohingyas were discussed.

Sheikh Hasina said Myanmar until now failed to create conducive environment in Rakhine barring the expected return of the Rohingyas.

“If the displaced Rohingyas are assured of safety, dignity and access to their land and property, they will be encouraged to go back to Myanmar,” she said.

Sheikh Hasina, however, expressed her gratitude to South Korea for supporting adoption of a resolution on the situation of Human Rights in Myanmar at the UN General Assembly in November 2018.

“We also appreciate Korea’s humanitarian aid for the Rohingyas,” she said as her Korean counterpart highly praised Bangladesh for hosing a huge number of Rohingyas.

The premier’s press secretary said business issues largely featured the talks when Sheikh Hasina said the bilateral trade was heavily tilted towards Korea and called upon Seoul to allow duty free market access for all of Bangladesh products without any exception.

“To narrow down the trade imbalance, we request you to consider allowing duty free market access for all of our exports without any exception,” Sheikh Hasina said.

Lee Nak-yon, on the other hand, said his government would consider the Bangladesh proposal for duty-and-quota- free access of its goods to South Korea.

The South Korean prime minister termed Bangladesh as a “potential country” with a huge investment opportunity while his country earmarked one billion US dollars for Bangladesh as overseas development assistance (ODA).

Sheikh Hasina, however, said Korea has substantial investment in textiles, tanneries and footwear factories in Bangladesh’s EPZs and recalled that Korean companies were “the first to invest in the RMG sector in Bangladesh during my first term in 1996-2001”.

She said Korea has substantial investment in textiles, tanneries and footwear factories in Bangladesh’s EPZs.

The Bangladesh premier said Korea may invest in ‘Bangabandhu Sheikh Mujib Shilpa Nagar’ which is the most potential investment hub for the investors under G2G and PPP model. ? ?

Extending heartfelt congratulations to Korea for becoming the 12th largest economy of the world with a GDP of US dollar 1.619 trillion, she said, “We welcome continuing interests of Korea to invest in Bangladesh.”

The prime minister said Korea turned out to be one of Bangladesh’s emerging development partners with economic and technical cooperations in health, ICT, education, water treatment, energy, transport sectors.

“Korea International Cooperation Agency-KOICA is making important contributions to our health, education and social welfare sectors as well,” she said.

Sheikh Hasina appreciated Korean fund for improvement of the reliability and safety of national highway corridors by Intelligent Transport System (ITS) while “KOICA’s support to human resource development of Bangladesh civil service is praiseworthy”d.

In response, the Korean prime minister said they are interested to work together with Bangladesh in the fields of energy, ICT and defence as well.

The prime minister said Bangladesh and South Korea are maritime nations, and to further ease maritime trade, a bilateral shipping agreement may be concluded.

“We propose for implementing an integrated Maritime Navigation System in Bangladesh with Korean Exim Bank Fund under EDCF,” she said.

Sheikh Hasina mentioned that now many Bangladeshi nationals are working in Korea under Employment Permit System (EPS) in manufacturing sector.

“We would like to request to re-open other sectors, including agriculture, construction, fisheries and service sectors, for Bangladeshi workers,” she said. The prime minister said collaboration with a Korean commercial bank can assist Bangladeshi workers in Korea to send remittances through legal channel.

Sheikh Hasina said a higher education exchange network can be developed between two countries with a view to exchange academic and research experiences and findings and transfer of technology.

“South Korea can be a valuable partner of Bangladesh in Technical Education and Skill Development,” she remarked.

Based on the foreign policy – Friendship to all, malice to none – initiated by Father of the Nation Bangabandhu Sheikh Mujibur Rahman, Bangladesh seeks peaceful resolution to all disputes and differences with countries in the region through dialogue.

The prime minister said Bangladesh, as a signatory to the Nuclear Non- Proliferation Treaty (NNPT) and the Comprehensive Nuclear-Test-Ban Treaty (CTBT), strongly supports all international measures for nuclear free zone in the Korean Peninsula.

“Our support for full implementation of the CTBT and NNPT in all aspects comes from our constitutional commitment. We welcome the recent de-escalation of tension in the Korean Peninsula,” she said.

Welcoming Prime Minister Lee Nak-yon to Bangladesh, Sheikh Hasina said, “We value our close friendly relations with the Republic of Korea based on mutual interests and spirit of cooperation,” she said.

After the establishment of diplomatic relations, she said, the cooperation between two countries in various fields has achieved fruitful outcomes.

“I recall my visit to South Korea in May 2010 when we committed to promoting our bilateral relations between our two countries to a comprehensive partnership,” she said.

The prime minister said it was also decided to intensify cooperation in trade, investment, energy and infrastructure development and transfer of technology on the basis of equality and mutual benefit.

“Under the leadership of President Moon Jae-in, Korea is transforming itself into a developed country,” she said, adding Bangladesh is being inspired by Korea in its endeavor to steer the nation to a higher level of development.

Sheikh Hasina said the greatest Bangalee of all times, Father of the Nation Bangabandhu Sheikh Mujibur Rahman dreamt of a ‘Sonar Bangla’ or ‘Golden Bangladesh’.

The South Korean prime minister extended his heartfelt congratulations to Sheikh Hasina on her election as the Prime Minister for the fourth time.

“The official talks between the two countries began at the Prime Minister’s Office around 4.40 pm today,” a source at the PMO said.

Before the talks, the two premiers had a tete-a-tete at the same place. Earlier, the prime minister received Lee Nak-yon at the Tiger Gate of the PMO at 4:15 pm by presenting a bouquet.