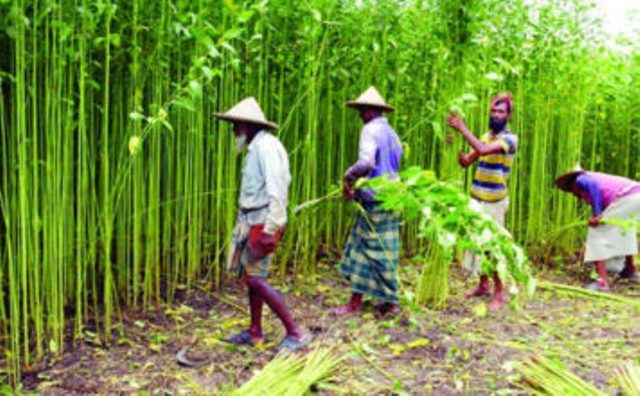 Harvesting of jute is progressing fast everywhere in all eight districts under Rajshahi division in the current season with a prediction of better yield. As there was favorable climatic condition, jute was cultivated on more lands than that of target fixed by the Department of Agriculture Extension (DAE).

At present, most of the growers along with their family members are very much engaged in harvesting, decomposing, segregating and selling activities of jute. On starting of full-scale harvesting and decomposing activities within next 15 to 20 days, jute will be available in the markets abundantly.

Abdur Razzaque, a farmer of Shreepur village under Paba Upazila, said jute’s golden era has started returning back. He said the role of private jute mills and government’s declaration about the mandatory use of jute bags in packaging public food grains boosted jute cultivation.

Last year, initial market price of jute was Taka 1400 to 1500 per mound. But, finally the price stood at Taka 1800-2,000 per mound, he said. Razzaque mentioned the price could have been more if there were no syndicate
of middlemen and traders. He sought government intervention of controlling the syndicate to facilitate the farmers to get fair price.

Meanwhile, DAE here has set a target of producing around 12.15 lakh tonnes of jute from 1.12 lakh hectares of lands in the Rajshahi division during the current season. Deb Dulal Dhali, Additional Director of DAE, said farmers got fair prices of jute during the last couple of years and as a result, they are now eager to cultivate more jute.

“Nine to ten years back, the farmers lost interest on jute cultivation as they did not get fair prices,” said the official. Agriculturist Dhali said jute farming has started getting brighter dimension through increasing its production and adopting other effective measures.

The growers are also being taken forward with modern varieties and
technologies relating to the jute cultivation and decomposition for their
benefits in the present competitive era. All the field level officials and
others concerned were instructed to attain the cherished goal.

Commissioner of Rajshahi division Nur-Ur-Rahman told BSS that increased
farming of jute could revive the past glory of the golden fibre ushering in a
new era in the economy as well as saving the environment and soil health from
further degradation.

Because of eco-friendly characters with quick rotting system, demand for jute has been increasing fast in the developed countries, Rahman added.