China says army can be deployed at Hong Kong’s request 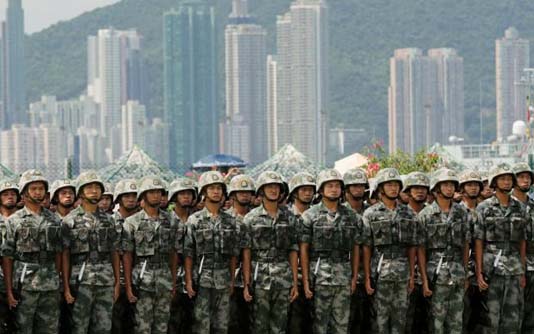 China issued a stark reminder Wednesday that its army could be deployed in Hong Kong if city authorities requested support in maintaining “public order” after weeks of sometimes violent protests.

Hong Kong has been plunged into its worst crisis in recent history after millions of demonstrators took to the streets — and sporadic violent confrontations between police and pockets of hardcore protesters.

The demonstrations were triggered by a controversial bill which would have allowed extraditions to mainland China but have evolved into a call for wider democratic reforms.

Beijing has labelled the protests as “extreme illegal violence”, but has left it to the city’s semi-autonomous government to deal with the situation.

Chinese defence ministry spokesman Wu Qian said at a news conference in Beijing that the ministry has been “paying close attention” to the situation in Hong Kong.

Asked how his ministry would handle the situation in the city, Wu pointedly noted that there are “clear stipulations” in Article 14 of Hong Kong’s garrison law — without elaborating.

According to the article, the city’s authorities may ask, “when
necessary”, the central government for assistance from the garrison “in the maintenance of public order and in disaster relief”.

This was the first time Beijing has publicly referred to the possibility of deploying the People’s Liberation Army (PLA) to deal with the unrest in Hong
Kong.

The PLA has maintained a garrison in Hong Kong since the former British
colony was returned to China in 1997, but its troops generally keep a low
profile and are rarely seen in uniform in public.

The rare public reminder comes days after anti-government protesters
vandalised the walls of the Chinese representative’s office in Hong Kong and
defaced the national emblem — an act that left Beijing fuming.

“The actions of some radical demonstrators challenged the authority of the
central government and touched upon the bottom line of the ‘One country, two
systems’ principle,” Wu said.

“This is absolutely intolerable.”

The Hong Kong government Tuesday dismissed online “rumours” that the
Chinese army has been deployed to guard key administrative offices linked to
Beijing — including the vandalised liaison’s office.

In early July, an army-linked newspaper in China ran photos of a military drill — by then a week old — by its garrison in Hong Kong, a move analysts described as a warning to Beijing’s critics. The Chinese military also received official ownership of a piece of prime Hong Kong waterfront land in May, which will allow its warships to berth in the city’s famed Victoria Harbour in future.