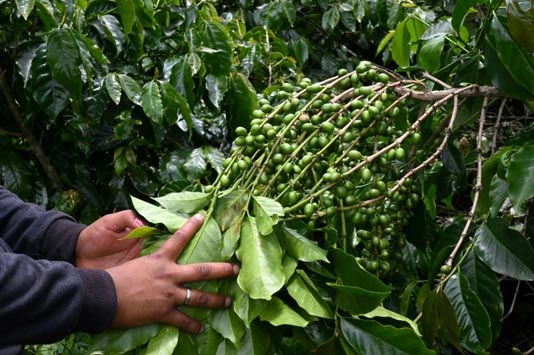 Many Guatemalans who spent years working in the United States to come home and set up a small coffee- growing business have seen their savings drained and their hopes dashed due to low coffee prices. “It was perhaps the worst idea we could have had,” said Julio Sandoval.

The 48-year-old spent 14 years working in a slaughterhouse in Nebraska before returning home with his wife to buy a small piece of land in the south of Guatemala to grow coffee. But he’s been left broke by the crash in coffee prices and now he dreams of leaving again, like many other former migrants AFP met who had returned to Guatemala as small business owners.

Like many in his situation, Sandoval is considering joining the stream of migrants heading north to the United States, despite President Donald Trump’s efforts to staunch the flow and the reportedly abysmal conditions under which migrants and refugees are held at detention centers.

In the mountains of the Jalapa department, accessible only by four-wheel drive, the fertile ground close to the town of Aguijotes is ideal for coffee plantations. It’s a region where 95 percent of land is used for growing coffee but six out of 10 families live in poverty.

The coffee industry employs more than 500,000 people in this region, with 125,000 families depending on the sector. Sandoval returned home three years ago but the business has given him “only losses.” “Coming back to work in coffee for three years, it was one of the worst ides we could have had for a better life,” he said with calm despair.

Sauro Solares, another coffee grower, came back to Guatemala in 2000 after living in California for four years. “The crisis sent sales plummeting and unemployment soaring due to the low price of coffee,” the 40-year-old said. According to Guatemala’s national coffee association, the 2016/17 harvest produced 3.3 million 60-kilogram bags that generated $738 million. A year later, though, 3.4 million bags brought in only $693 million.

Things are even worse for Dimas Mejia, 54, whose crops were ravaged by a
fungal disease called rust.

He spent six years working in Denver, Colorado before returning in 2006,
but had to take a loan to keep his business afloat.

A 46-kilogram bag of coffee sells for $15 but it’s impossible to make money
at that price, the local growers say, because 40 percent of that is swallowed
up in harvesting costs.

That same 46 kilogram bag of coffee is sold at $115 on the New York Stock
Exchange, meaning international buyers are making a fortune off the hard
grind of the struggling coffee growers.

Sandoval wants to give it another year to see if things improve.

“We’re failing, there’s nothing left for us but to look at returning north
and stop investing here,” he lamented.

Trump’s measures aimed at stemming the flow of Central American migrants
trying to get to the United States don’t deter Sandoval.

“It’s harder to die of hunger. It’s better to die fighting for a better
life, a better future,” he said.

Most coffee growers are at least “thinking of abandoning their crops” to migrate to the US, said Solares. “Many already have abandoned them.” “They have hope that they’ll get through” he said.