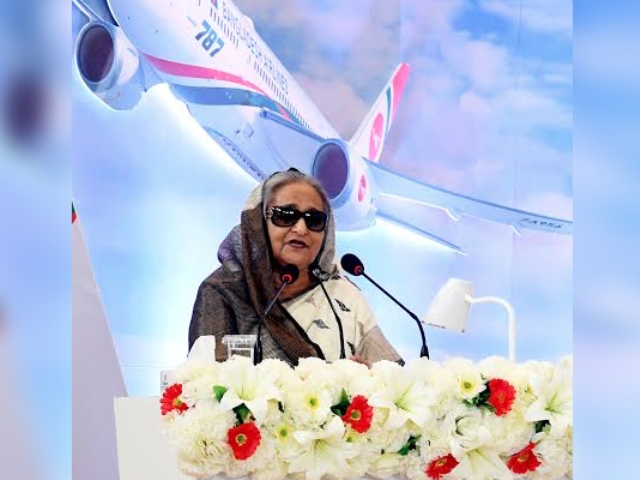 Terming Bangladesh Biman as a ‘symbol of independence’, Prime Minister Sheikh Hasina today asked authorities of the national flag carrier to enhance its reputation by improving passenger services further. “It’s a responsibility of all involved in operating the national flag carrier to retain and increase reputation of Biman by further raising its
passenger services,” she told the induction ceremony of ‘Gaangchil’, Biman’s third Boeing 787-8 Dreamliner, at the VVIP Terminal of Hazrat Shahjalal International Airport (HSIA) here this afternoon.

Simultaneously, the prime minister called for proper maintenance of the aircraft of Biman Bangladesh Airlines. “I’ll like to tell those involved in running Biman to work with utmost sincerity and patriotism … You’ll have to work keeping in mind that Bangladesh is our country and Bangladesh Biman is our own asset,” she said.

Mentioning the commissioning of ‘Gaangchil’ today, Sheikh Hasina said, “I’ll like to request all concerned to take care so that the aircraft can fly properly spreading its wings.” The premier said the induction of Gaangchil into the Biman’s fleet is another milestone for the national flag carrier. “It’s a day of fulfilling the dream,” she said.

Earlier, the prime minister commissioned ‘Gangchil’ cutting a ribbon at the VVIP Tarmac of HSIA. After the inauguration, Sheikh Hasina boarded and inspected inside the aircraft and talked to its pilots and other crew members. A munajat was offered on the occasion, seeking continued peace, progress and prosperity of the nation.

Managing Director and CEO of Biman Captain Farhat Hasan Jamil delivered the welcome address. Ministers, advisers, parliament members, the chiefs of three services, dignitaries and high civil and military officials were present at the function. US Ambassador to Bangladesh Earl R. Miller was also present at the ceremony.

Spelling out her government’s steps for development of the national flag carrier, the prime minister said Bangladesh Biman is a symbol of the country’s independence.

“When Biman’s aircraft go to different countries of the globe, the people of those countries could know about Bangladesh through it. So, we’ve given special attention to development of Bangladesh Biman,” she said.

Sheikh Hasina said her government has taken various initiatives for the uplift of the airports.

“When our government first assumed the office in 1996, we upgraded Chattogram and Sylhet Airports into international airports,” she said.

The prime minister said the work on turning Cox’s Bazar Airport into an international one has started so that planes of various airlines could come here and they can refuel.

“Cox’s Bazar has the longest sandy beach in the world. There is no such a sea beach anywhere of the globe … we’ve to focus and utilise the potentials of the tourist town and we’re constructing the biggest international airport to achieve the goal,” she said.

“We’re also making arrangements so that Biman can operate flights in other countries apart from the existing destinations,” she said.

The premier expressed her firm optimism that the problems regarding operating Biman flights in the United States will be solved soon. “We’re making efforts to increase Biman’s flight frequencies in the UK,” she said.

Sheikh Hasina said her government has taken a decision to procure aircraft for Bangladesh Biman by taking loans from local banks instead of borrowing money from other countries.

The premier continued saying: “That means we want to stand on our own feet … we want to move with self dignity and want to build Sonar Bangla as dreamt by Bangabandhu.”

The prime minister sought cooperation of all to build a hunger-and-poverty-free Sonar Bangla as dreamt by the Father of the Nation. “Bangabandhu sacrificed his life for establishing Sonar Bangla and we’ll have to repay debt of his blood by materialising his dream,” she said.

Sheikh Hasina said her government will buy more aircraft later according to the needs. “We want to purchase two cargo planes to boost export and import and we’ve already taken a decision in this regard,” she added.

Biman’s MD and CEO said ‘Gangchil’ will depart Dhaka for Abu Dhabi in its maiden flight at 5:30 pm today.

The third Boeing 787-8 Dreamliner, the 15th aircraft of the national flag carrier, was added to the Biman’s fleet on July 25. It landed at HISA directly from the USA’s Seattle’s Boeing Factory in the afternoon on the day.

The prime minister named all the Dreamliners, the sources said.

Earlier, the first Boeing 787-8 Dreamliner, named as ‘Akash Beena’, arrived here in August last year, while the second one known as ‘Hangsabalaka’ arrived in December last.

In 2008, Biman Bangladesh Airlines signed a US$2.1 billion agreement with Boeing to purchase 10 new aircraft.

The fourth Dreamliner ‘Rajhangsha’, the last one of the 10 new aircraft, will be added to the Biman’s fleet next month, the sources said.

Gangchil, a 271-seat Boeing 787-8, has been designed as 20 percent fuel efficient carrier compared to the other aircraft.

The airliner has the capacity to fly 16 hours nonstop with an average speed of 650 miles per hour.

It provides its passengers with WiFi services at a height of 43,000 feet, allowing passengers to browse the internet or connect with their friends and family at any end of the world.