PM for OIC’s strong role to end conflicts among Muslims 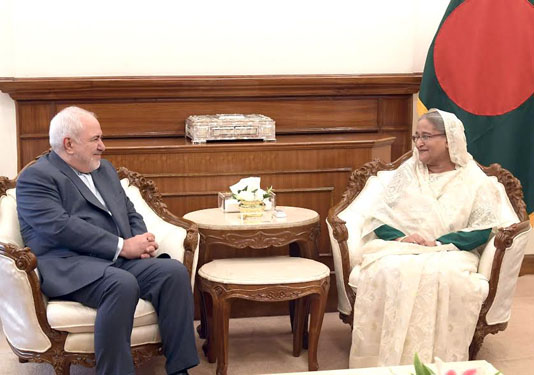 Prime Minister Sheikh Hasina today stressed the need for a pivotal role of the Organisation of Islamic Cooperation (OIC) in forging unity of the Muslim community and stopping fratricidal conflicts among them.

“The OIC would have to play a stronger role in stopping fratricidal conflicts among the Muslim community,” she said when visiting Iranian Foreign Minister Mohammad Javad Zarif paid a courtesy call on her at the Prime Minister’s office here.

Referring to the conflicts among the Muslims, Sheikh Hasina said, “The Muslims are shedding their bloods because of their divisions while the third party or country is enjoining the benefits of it.”

The Prime Minister opined that the conflicts between the Muslim countries could be resolved bilaterally or multilaterally.

Mentioning that religious harmony prevails in Bangladesh, Sheikh Hasina informed the Iranian minister that she had adopted two Shia girls, who were affected by the devastating Nimtali fire.

On Bangladesh’s development, the Prime Minister said the country has achieved 8.1 percent GDP growth keeping the inflation rate at 5.4 percent (in 2018-’19 fiscal year), adding, “The aim of her government is to ensure the overall development of Bangladesh.”

Describing the cultural ties between Bangladesh and Iran as historical, she said, “Many Farsi words had been coined to Bengali language.”

Describing the progress of Bangladesh as exemplary achievement, Javad said, “I’m highly impressed with the socio-economic development of Bangladesh and it has only been possible for your (Prime Minister Sheikh Hasina) personal leadership.”

The visiting Iranian minister also appreciated the role of the Prime Minister in the OIC forum.

He expressed satisfaction over the existing relations between the two countries and said, “The bilateral relationship prevailing between the countries is good.”

Javad Zarif informed the Prime Minister that Tehran is going to hold a seminar marking the birth centenary of Father of Nation Bangabandhu Sheikh Mujibur Rahman (in 2020).

He apprised the PM of the present situation of Iran after the recent US sanctions and his country’s scientific development, saying, “The Iranian economy is recovering overcoming the challenges after the sanction.”

The Iranian minister said his country doesn’t want to spend money on arms.