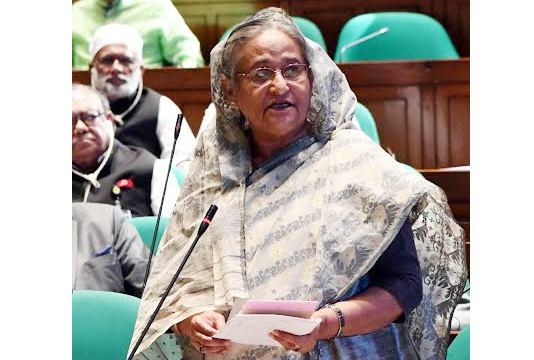 Praying for eternal peace of the departed soul of opposition leader in the house and Jatiya Party (JP) chairman HM Ershad, Prime Minister Sheikh Hasina today told the Jatiya Sangsad that the trust and confidence of the people on the parliament have returned in the last 10 years.

“I believe that the confidence and trust of the people on parliament have returned in the last 10 years,” she said while taking part in the discussion on an obituary motion taken by the parliament for deaths of dignitaries including opposition leader HM Ershad and Bangladesh National Awami Party (NAP) President Professor Muzaffar Ahmed and former lawmaker Sirajul Islam.

Praying for peace of the departed soul of Ershad, she said that nothing is left after death of a people despite there were many things to say as they (Sheikh Hasina and Awami League leaders and activists) were captured time and again and inhumanly tortured by the then Ershad government.

“Despite the fact, we have compromised with many things for the sake of
the country, people, democracy, and development and are working for the
overall development of the country to reach the fruit of the independence to
the doorsteps of the people,” she said.

Praising Jatiya Party for playing effective role as the main opposition
party, Sheikh Hasina, also Leader of the House said, “Their (Jatiya Party)
contribution as opposition have played a significant role to strengthen the
democracy as they are taking part in discussions on various bills alongside
bringing amendments to those.”

The prime minister, however, welcomed the BNP for joining the parliament
after declaring it as illegal as the party along with others took part in the
2018 general elections, saying, “People’s participation were in the 2018
general election, so the BNP couldn’t topple the Awami League government with
support of the people.”

“But, the Awami League with the support of the countrymen successfully
overthrew the BNP government within one and a half month it assumed office
after the farcical general election on February 15, 1996,” she said.

The prime minister said that Ziaur Rahman and HM Ershad are no longer
presidents (of the country) as the apex court in a verdict announcing illegal
capture of power by them declaring the martial law.

“It is not legal to call them (Ziaur Rahman and HM Ershad) as presidents in
accordance with the High Court verdict as it has paved the way to continue
the democracy in the country,” she continued.

The Prime Minister, however, criticized Khaleda Zia as her government
didn’t behave with HM Ershad properly while he was in jail, saying that the
AL government has given possible every facility to the BNP chairperson, who
is now in jail for a number of graft cases including misappropriation of
money of orphans.

She said that Khaleda Zia had created a scope for Ershad to capture power
after the 1981 farcical general election which took place without voters and
in exchange of it, Ershad gave Khadea Zia various facilities including two
houses and Taka 10 lakh as well.

The Prime Minister also sought peace of the departed soul of the late
Indian external affairs minister Sushma Swaraj for her role in placing the
land boundary agreement before the Indian parliament which was passed
unanimously.