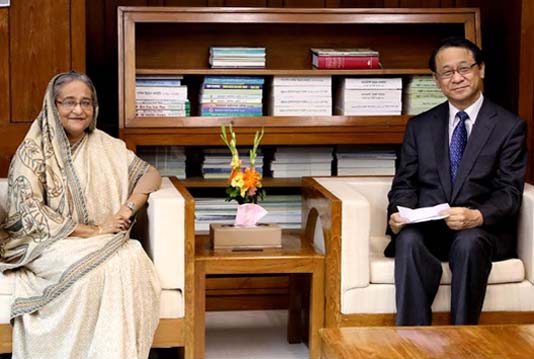 Highly appreciating Bangladesh’s tremendous socioeconomic uplift over the last 10 years, Japanese Ambassador to Bangladesh Hiroyasu Izumi has said his country will continue long-term support to Bangladesh in its overall development.

“Bangladesh has attained tremendous socioeconomic development in the last 10 years under the leadership of Prime Minister Sheikh Hasina, especially in the GDP growth, which is the fastest in the world,” he said.

The envoy added: “We’re committed to extending long-term support to Bangladesh in its overall uplift.”

The ambassador made the remarks when he paid a farewell call on Prime Minister Sheikh Hasina at her Jatiya Sangsad office here on Monday evening.

“Bangladesh people have a historical opportunity to develop under your leadership,” the press secretary quoted the envoy as saying.

The ambassador said Japan is also interested to set up an LPG terminal in Bangladesh.

On the Rohingya issue, Hiroyasu Izumi said: “Our sympathy is always with Bangladesh.”

He highly appreciated Bangladesh not making fence along the Myanmar border and allowing the Rohingya nationals to take shelter.

The prime minister highly appreciated the Japanese assistance for Bangladesh’s development, saying that since liberation, Japan continued to support to develop Bangladesh’s economy.

In this connection, she particularly praised the Japanese assistance in construction of metro rail (MRT), Matarbari Power Plant and third terminal at Hazrat Shahjalal International Airport.

The prime minister put emphasis on strengthening connectivity among the countries of the region, saying trade and commerce will be further boosted up if communication improves.

In this regard, she pointed out the BCIM and BBIN initiatives for further improving connectivity among the countries of the region.

Sheikh Hasina said her government has offered land to Japan at Sabrung in Cox’s Bazar to set up industries. “Japan can also develop the sea beach there,” she said.

While talking about the Rohingya issue, the prime minister urged Japan to persuade Myanmar to take back their nationals from Bangladesh.

“It’s a big burden for Bangladesh and Myanmar must take back their nationals from here,” she said.

The press secretary said on behalf of the Japanese premier, the ambassador invited Prime Minister Sheikh Hasina to pay an official visit to Japan.

In reply, the prime minister extended her greetings to the Japanese premier through the ambassador.

Expressing satisfaction over the existing friendly relations between the two countries, Sheikh Hasina said Japan has a special place in the hearts of Bangladeshi people.

PMO Secretary Sajjadul Hassan was present on the occasion.