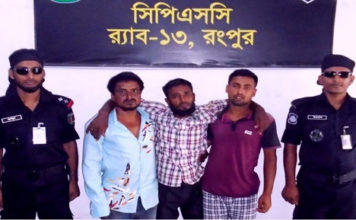 Earlier, a group of 7 to 8 kidnappers promised jobs for the three masons over cell phone and abducted them from different areas and took them to Bhaduria Shalbon area at 7 pm on Wednesday. Later, the abductors tied hands and legs of the kidnapped persons, tortured mercilessly and demanded Taka two-lakh ransom for each over cell phone from their relatives for their release.

The abductors also threatened relatives of the victims to kill them and hide their bodies if the ransom amount were not paid timely. Being informed, an operational team of the Crime Prevention Special Company (CPSC) of RAB-13 from Rangpur conducted a raid and encircled Bhaduria Shalbon from all sides and rescued the injured victims with tied hands and legs.

“After providing primary treatments, the elite force handed over the rescued victims to their relatives on Thursday afternoon,” the release said. However, none of the abductors could be arrested as they tactfully managed to escape from the scene during the raid.