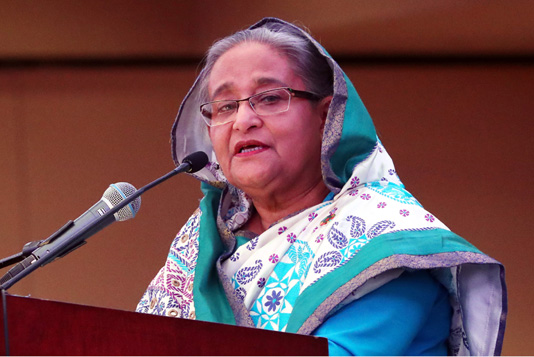 “We’ve taken stringent action against terrorism, militancy, corruption and drugs … I want to tell one word clearly that if anybody earns money by holding dishonest path and his/her irregularities, chaos or dishonest means are found out, stern action will continue against those persons whoever they might be, even if they’re my party men,” she said.

The prime minister was addressing an expatriate civic reception accorded to her by the US Awami League at Hotel Marriott Marquis here on Saturday afternoon. Sheikh Hasina said it becomes very difficult for the people and their
children to lead an honest life when the society is crippled by persons who earned money through dishonest means.

She said those who want to lead an honest life have to move with some limitations. “But those who lead a lavish life through the money earned by dishonest means always use this and that brands and create a chaotic situation,” she said

Referring to irregularities in development schemes, Sheikh Hasina said the government is undertaking massive uplift schemes. “Bangladesh would have been developed further if every single taka of the projects had been spent properly,” she said.

“Now I’ve to find out where are the loopholes and lapses while who is affecting this place and how,” she said. The prime minister said she asked for looking into another thing that whose earnings are what and how they lead life. “We’ve to found out it and then we could protect our society and new generations by removing this menace and unholy competition,” she said.

Sheikh Hasina said the drive against the narcotics will also continue as it
destroys a family and country. “We’ll track down those involved in the drug
peddling,” she said.

Coming down hard on some people who are always critical of the government,
Sheikh Hasina said these people do not feel comfort when the development of
the country is made. “They always lodge complaints to the foreigners against
the government and country out of jealousy,” she said.

About the BNP’s debacle in the last general elections, the prime minister
said the BNP was not sincere in the election rather the party was engaged in
nomination trade.

Sheikh Hasina, also the Awami League president, said the people of the
country kept confidence and trust in her party as they know the country will
be developed and their lot will be changed if Awami League remains in power.

She also posed a question that why the people will cast vote for BNP which
made the party chairman a convict?.

The prime minister said Khaleda Zia’s one son was convicted for laundering
money, while her another son was detained while going to play casino in
Singapore.

Highlighting the country’s tremendous development in different sectors, the
premier said the grassroots people are being mostly benefitted from this
uplift.

About taking foreign loan, the prime minister said her government is taking
steps carefully so that the country is not affected due to taking this loan.

Pointing out her government’s steps for the welfare of the expatriates,
Sheikh Hasina said her government gave permission of establishing three NRB
banks.

In this connection, she urged bank authorities to take initiatives so that
expatriates are attracted to invest in the country. “We’ve also taken steps
so that expatriates can send money through legal channels,” she said.

The prime minister said the government has purchased 10 aircraft from
Boeing company. “Discussion is underway to resume Dhaka-New York flight and
we’ve already improved our airport security in this regard,” she said.

The premier said her government wants to present a better and beautiful
life to the people of Bangladesh by eliminating terrorism, militancy,
corruption and drugs which the Father of the Nation had dreamt.

“Bangladesh will be prosperous and developed country in the world and
hunger and poverty-free Sonar Bangla as dreamt by Bangabandhu,” she hoped.

At the outset of the speech, a minute’s silence was observed as a mark of profound respect to the martyrs of the language movement, liberation war, Bangabandhu and other martyrs of the August 15 carnage and four national leaders.