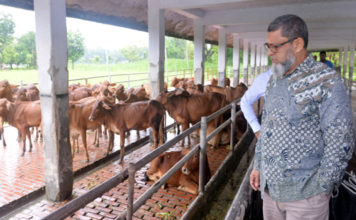 The Rajshahi Regional Artificial Insemination (AI) Laboratory has been playing vital role towards improving cattle breeds besides fulfilling the region’s increasing demands of proteins like meat and milk.

Established on 10 acres of land at Rajabarihat under Godagari upazila of the district in 2014, the laboratory is producing deep liquid semen and liquid nitrogen and transferring those among the farmers at an affordable price.

Fisheries of Livestock Secretary Roisul Alam Mondal visited the AI Laboratory yesterday to witness the activities being done there. He stressed the need for more intensive research on the genetic factors of domestic animals for generating more high-milking cows.

“If the high-breed cow can give 50 litre milk per day so why not the others,” he added. Director General of Directorate of Livestock Services Dr Hiresh Ranjan Bhowmik and its Rajshahi Divisional Deputy Director Kolyan Kumar Fouzder and Assistant Director (Animal Production) of District Artificial Insemination Centre Ismail Haque, among others concerned, accompanied the secretary.

“We are preserving high quality semen from cattle after importing the specimens from abroad through the laboratory,” said Ismail Haque while talking to BSS on the issue. More than 4.87 lakh doses of semen were collected from 30 genotype bulls and 3.08 lakh out of total 5.84 lakh cows including 1.81 lakh cross-breeds were inseminated with the collected semen in the region comprising Rajshahi, Natore, Naogaon and Chapainawabganj in last 2018-19 fiscal, he added.

He added that the region had to depend on the imported deep frozen semen around seven to eight years ago. But at present it has became capable to produce the semen according to its requirement since commissioning of the laboratories.

The unemployed are being imparted training along with providing them with necessary instruments and furniture for intensifying the field level artificial insemination activities.

The technology helps increasing milk production by one kg from every cow on an average for the last couple of years.

Emphasis is being given to supply of logistic supports and motivation of people to further expand the artificial insemination programme for the sake of enhancing meat and milk production, Haque added.

Mojibur Rahman, a farmer of Zoanpur village under Mohadevpur Upazila, said the cows are giving milk ten times more than that of the previous record due to the cross breeding. Artificial insemination of cows is gaining popularity in the northern region following significant achievement in improving the breeding system.

Morzina Begum, another farmer of Pakuria village under Bagha Upazila, said the regional artificial insemination laboratory has been playing a vital role in making the programme popular among the people and it has attained a remarkable success in this regard.