PM promises not to allow “termites” to eat up development benefits 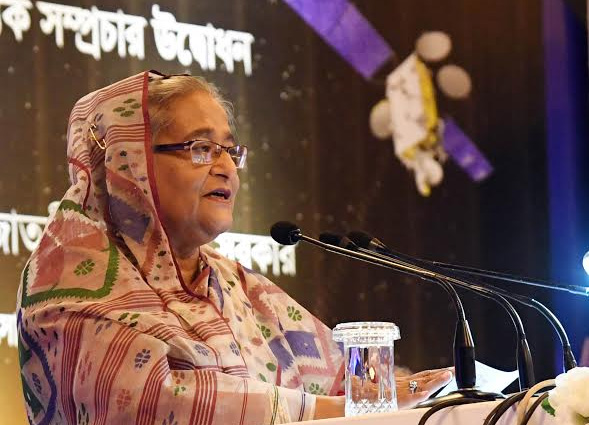 Prime Minister Sheikh Hasina today pledged not to allow “termites” to eat up development benefits by plundering money from the development projects as she opened the commercial transmission of private television channels using Bangabandhu Satellite-1 at a city hotel.

“The termites are (largely) eating up the money while we are implementing the development projects —We have to capture the white ants to use every penny of people’s hard earned money for country’s development,” she said. She said “we will continue the ongoing drives against militancy, terrorism, drugs and corruption irrespective of party and family as I want to bring smile on distressed people’s face as dreamt by Father of the Nation Bangabandhu Sheikh Mujibur Rahman.”

The prime minister urged the media personalities to remain alert against broadcasting any sort of propaganda that lead to create anarchy and mistrust among the people as well as in the country in the name of opposing the government. “I would like to make another appeal to you (media personalities) to broadcast the information of the development activities taken by the government so that confidence can be made among people as they can dream of better life,” she said.

Information Minister Dr Hasan Mahmud spoke on the occasion as the special guest with Posts and Telecommunications Minister Mustafa Jabbar in the chair. Secretary of Posts and Telecommunications Division Ashoke Kumar Biswas and Chairman of the Association of Television Channel Owners (ATCO), a platform
of private television channel owners, Anjan Chowdhury also spoke on the occasion.

BCSCL Chairman Dr. Shahjahan Mahmood handed over the agreement, inked with the private television channels for their commercial transmission using the feed of Bangabandhu Sattelite-1, to Prime Minister Sheikh Hasina. Later the premier handed it over to the ATCO chairman. An audio-video presentation on the multifaceted use of the Bangabandhu Sattelite-1 in various sectors for the country’s overall development was
made.

Sheikh Hasina said with the inauguration of the commercial transmission of the private television channels using the Bangabandhu Satellite-1, the country’s broadcast industry is going to enter a new era as it will save a huge amount of foreign currency to be paid by the local TVs as rent.

“We are now standing up on our own feet through the inauguration which removed the foreign dependency to this end, saving huge amount of money,” she said.

The Bangabandhu Satellite-1, which was successfully launched on May 12 last year, has created huge opportunities in employment generation and is being used in multifaceted purposes such as reaching healthcare services and quality education to all the people through telemedicine and e-education, getting advanced forecast of weather and other facilities, she said.

The premier said her government has been working to launch massively the Bangabandhu Satellite-2 as a satellite has lifetime of 15 years.

“Some people were making jokes when we introduced the digital Bangladesh,” she said, adding that the countrymen are now getting benefit of it.

Mentioning that her government launched Bangabandhu Satellite-1 in the outer space on 12th May 2018, Sheikh Hasina said through the satellite launching Bangladesh reached a new height of glory.

The Prime Minister said the commercial broadcasting through this satellite will remove broadcasting related problems of the electronic media and will decrease foreign dependency resulting in saving huge currency.

Mentioning that the satellite technology will create huge employment opportunities directly or indirectly, she said the quality of telecommunication and broadcasting will increase through it.

The Prime Minister said there are 40 transponders in the Bangabandhu Satellite-1 and among those, 20 will be utilized in the country and other 20 will be leased to the other countries to earn foreign currency.

Mentioning a company has been formed named ‘Bangla Communication Satellite Company’ to administer the satellite, she said the satellite will play a significant role in telecommunication services in the costal and remote areas of the country in disaster management.

The premier said people of the remote areas will get better healthcare through telemedicine services using the satellite.

The equality education can be reached across the country through e-education technology, she added.

The Prime Minister said Bangabandhu Sheikh Mujibur Rahman Aviation and Aerospace University has already been set up in Lalmonirhat for higher studies over outer space.

Describing various activities of her government to build a digital Bangladesh, Sheikh Hasina said the government installed optical fibers and expanded 3-G and 4-G services to the remote areas along with the free flow of information technology.

Besides, internet facilities have been expanded to the remote areas and around 5,800 digital centers set up at the union level, she added.

The premier said the only motto of her government is to ensure welfare of the countrymen and building a poverty- and hunger-free developed and prosperous country as dreamt by father of the nation Bangabandhu Sheikh Mujibur Rahman.

She said her government has been implementing mega projects such as Padma Bridge, Karnaphuli Tunnel and Metrorail to give the people a better life.