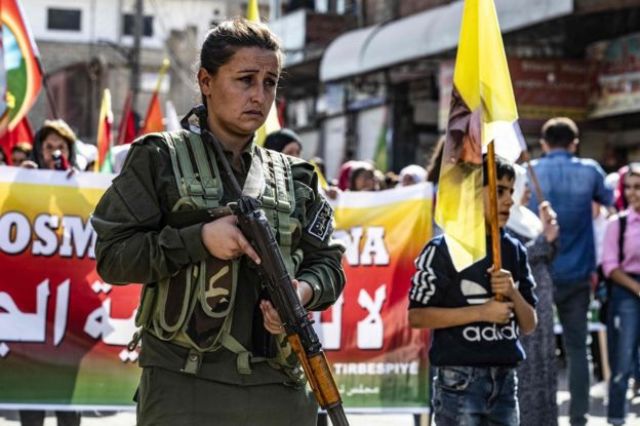 Turkish warplanes have bombed parts of north-eastern Syria at the start of an offensive which could lead to conflict with Kurdish-led allies of the US.

According to the Kurdish-led Syrian Democratic Forces (SDF), civilian areas came under attack from Turkish planes.

Turkish ground forces have also been massing on the border.

The offensive was launched just days after President Donald Trump controversially withdrew US troops from northern Syria, a decision announced after a phone call with Mr Erdogan that sparked widespread criticism at home and abroad.

The Kurds – key US allies in defeating the jihadist group Islamic State (IS) in Syria – guard thousands of IS fighters and their relatives in prisons and camps in areas under their control and it is unclear whether they will continue to be safely detained.

What has Turkey said?

On Twitter, Mr Erdogan said the mission “was to prevent the creation of a terror corridor across our southern border, and to bring peace to the area” and that it would “preserve Syria’s territorial integrity and liberate local communities from terrorists.”

Several large explosions were reported in the border town of Ras al-Ain while blasts were also heard in Tal Abyad, according to the Reuters news agency.

Earlier, the Kurdish-led administration in the region called on civilians to “head to the border with Turkey to fulfil their duty”

Mr Trump’s withdrawal of the few dozen US troops in the border area was seen as a “stab in the back” by the SDF and drew condemnation even from the president’s Republican allies.

He responded to the criticism by threatening to “obliterate” Turkey’s economy if it went “off limits” in the incursion, saying Turkey should “not do anything outside of what we would think is humane”.

How would an incursion affect the IS situation?

The SDF says it is detaining more than 12,000 men suspected of being IS members in seven prisons. At least 4,000 of the prisoners are foreign nationals. The exact locations have not been not revealed, but some are reportedly close to the Turkish border.

Two camps – Roj and Ain Issa – holding families of suspected IS members are inside the “safe zone”. Mr Trump warned Mr Erdogan if he did send troops into northern Syria, they would be responsible for securing captured IS fighters.

On Wednesday, IS militants reportedly carried out three suicide attacks in their former de facto capital of Raqqa, about 80km south of Akcakale on the Turkish border. There was no confirmation of casualties.