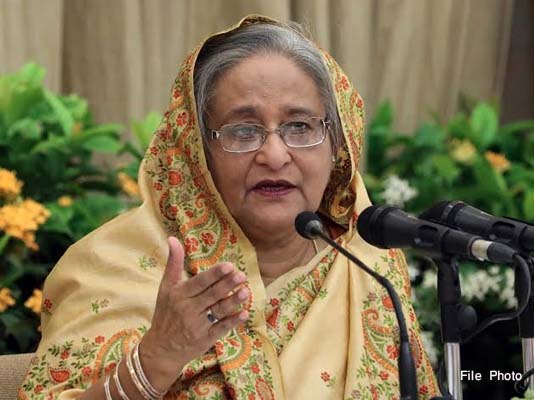 Prime Minister Sheikh Hasina today said Bangladesh is now a role model in disaster management along with development in the world as she addressed a function on International Day for Disaster Reduction.

“Bangladesh became a role model not only in development but also in disaster management in the world”, she told the function at Bangabandhu International Conference Center here. Mentioning government’s different successes in disaster management, the premier said “Our government has achieved a great success in reducing risk
and losses of lives and properties caused by cyclone, flood, drought and earthquake which earned international community’s acclamation.”

The prime minister said in July last Bangladesh hosted Dhaka meeting of the Global Commission on Adaptation, where the former Secretary General of UN declared of establishing a “Global Centre for Adaptation-Dhaka Office” as a symbol of Bangladesh’s outstanding performance to this end.

Two disaster resilient house owners expressed their gratitude to the prime
minister for making them such abode. The government has built such 11604
houses for disaster victims.

The premier distributed Cyclone Preparedness Program (CPP) Award among
three out of 82 best volunteers for their outstanding contributions to
disaster management.

Earlier, a video documentary was screened describing the activities of the
ministry in disaster management.

The prime minister said Father of the Nation Bangabandhu Sheikh Mujibur
Rahman was the pioneer in disaster risk reduction programmes in the country,
adding Bangabandhu had taken various initiatives like building 172 ‘Mujib
Kellas’ to protect the lives and properties from devastating cyclone.

“With the kind cooperation of the then League of Red Cross, Bangabandhu
had undertaken the Cyclone Preparedness Program (CPP) in 1972,” she said.

The premier said that currently, the CPP has about 56000 trained
volunteers. In addition, “there are 24-lac Ansar-VDP, 17-lac scouts, 4-lac
BNCC and 4-lac Girls Guides members ready to be engaged in humanitarian
response at any time,” she added.

“Our Government is constructing 378 more Mujib Kellas. Apart from this,
3,868 multi-purpose cyclone shelters have been built across the coastal
districts and 1,650 more shelters will be constructed gradually”, she said.

The prime minister said her government, however, always responded very fast
whenever it received forecast of any disaster, engaging in every human and
material support to reduce the loss of lives and property unlike the previous
regimes.

She recalled that the then BNP government took no steps while the deadly
1991 cyclone hit the south-eastern coastlines saying “even they didn’t care
of information about the disaster”.

“We adopted Standing Orders on Disasters (SoD) after assuming office in
1996 to let people know what to be done if any disaster strikes. We then
revised the orders in 2010 after coming to power for the second time in
2009,” the premier said.

Referring to Disaster Management Act-2012 enacted by her government, she
said “Under the auspices of this act, we formed the Department of Disaster
Management, which is playing an important role in risk reduction and
management activities during natural and human error caused disasters”.

Keeping in mind the sufferings of the internally displaced people caused
by natural disasters, “we have formulated a strategic paper in 2015 and also
have undertaken national resilience plan, which has highly bearing on the
Sendai Framework and the SDGs,” she continued.

The premier said National Emergency Operation Centre (NEOC) was established
in 2015 as a Humanitarian Staging Area is also being built for large scale
disaster management.

“In the meantime, we started modernization and expansion works of the
Saidpur Airport, so it could be a regional hub of emergency services even for
the neighboring countries such as India, Nepal and Bhutan,” she said.

Referring to different initiatives for tree plantation in large, the prime
minister said hundreds of thousands of trees are being planted every year by
the initiatives of her government and her party. Awami League’s associate
body Krishok League is also playing a big role in this regard, she added.

“We have taken a project on providing 5,00,000 household grain stores
(Silos) to the families as we have already given silos to 3,28,000 families.
Besides, under the cooperation of World Bank, we are constructing 8 silo
complexes in 8 districts with a total of 5,00,000 metric ton storage
capacity” she stated.

Mentioning that Bangladesh has created a dedicated Climate Change Trust
Fund to achieve climate resilience, the prime minister said her government
has taken steps for river management specially through dredging for
maintaining navigability of rivers.

Besides, the government has allocated 100 crore taka in the current budget
to build houses for the people affected by the river erosions, she added.