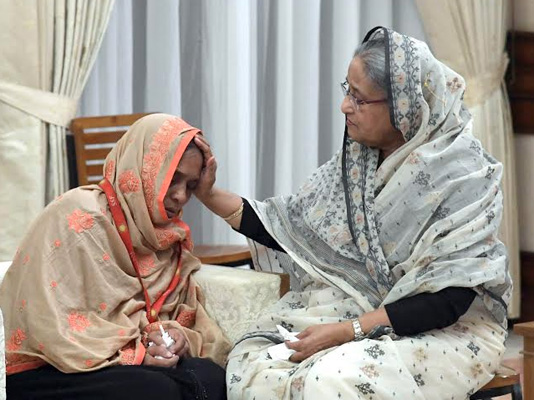 The prime minister said this when family members of Abrar Fahad, who was killed in a dormitory of Bangladesh University of Engineering and Technology (BUET) on October 7, met her at her official Ganabhaban residence here this afternoon.

He said Abrar’s mother Rokeya Khatun expressed profound gratitude to the prime minister for taking prompt steps after the killing of her son.

“I have no language to express gratitude for the motherly role you played after the incident,” she said.

The press secretary said Abrar’s mother made this comment for eight to 10 times.

The prime minister said she quickly directed the law enforcers to arrest the killers of Abrar. “The killers are killers and criminals are criminals … I didn’t see who belonged to which party,” she said.

Sheikh Hasina told Abrar’s parents: “I’ve no language to console for what you have lost.

“Please look at me, I have lost everything in one night … I understand the pain of losing near and dear ones,” she said.

The prime minister said that the killers of Abrar are not human. “How could they kill a person with whom they were sitting and studying?” she said.

Sheikh Hasina said that after the incident the police were directed to collect the video footage of the incident. “But I don’t understand why some of the BUET students created obstacles to their collecting the footage,” she said.

The press secretary said that a heart rending scene was created when Abrar’s mother embraced the prime minister and broke into tears after the latter came to the meeting room of Ganabhaban.

Karim said the prime minister held her with great affection for some time and sat down beside her instead of her designated chair.

Abrar’s family members expressed gratitude to the administration, police and the countrymen for their wholehearted support to them.

Abrar Fahad, a second year student of Electrical and Electronic Engineering Department of BUET, was beaten to death inside the university’s Sher-e-Bangla Hall in the early hours of October 7.

Police recovered his body from between the ground floor and the second floor of the Sher-e-Bangla Hall at 3am on the day.

Abrar’s father Barkat Ullah filed a case against 19 people with Chawkbazar Police Station in connection with the Abrar murder.

Police have so far arrested 19 persons in connection with the murder.