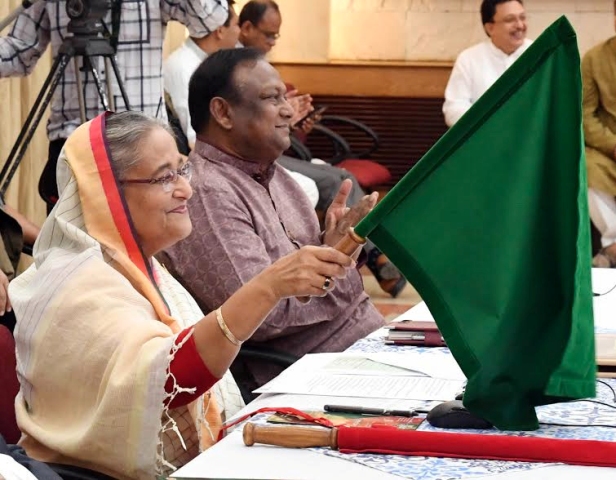 Prime Minister Sheikh Hasina today said the then BNP government referred to close down rail communication on several routes calling them non-profitable as prescribed by an international organisation which eventually proved suicidal for the nation.

“BNP’s decision of closing down rail communication on several routes in the country considering them non profitable as prescribed by an international organisation was suicidal, “she said while inaugurating the first-ever direct intercity train “Kurigram Express” on Kurigram-Dhaka-Kurigram route. The premier inaugurated the “Kurigram Express” through a video conferencing at her official residence Ganobhaban here.

She simultaneously opened the replacement “Reck” of “Rangpur Express” and Lalmoni Express inducting modern and new coaches to improve train services from Dhaka to northern region.

Mentioning that the then BNP government wanted to destroy the railway sector ignoring its necessity for socio-economic welfare of the people, Sheikh Hasina said “I will definitely show the BNP, which wanted to close
down the rail communication labeling them unprofitable, how it could be profitable.”

The new coaches for the Kurigram Express have been imported from Indonesia
with having some modern facilities such as wheel chairs and widened main and
toilet doors for easy movement of the physically challenged people, wifi,
bio-toilet and modern and improved roof-mounted air condition.

Bodies of the coaches are made of stainless steel with having modern
facilities for the passengers.

The premier later exchanged views with the local lawmakers, local
administrative officers and a cross section of people of Lalmonirhat,
Kurigram and Rangpur districts.

Railways Minister Nurul Islam Sujan, who is from Kurigram, spoke on the
occasion.

Sheikh Hasina said the railway sector had remained neglected for long after the killing of Father of the Nation Bangabandhu Sheikh Mujibur Rahman in 1975.

“The government has taken plans to bring the entire country under a rail network,” she said, adding, “The northern region was connected by the rail network through the Bangabandhu Bridge, while steps have been taken to extend railways from Dhaka to Barisal, Mongla and other parts of the country through the Padma Bridge.”

The Prime Minister said her government has been implementing a massive programme to spread the railway network to every division. Many new rail routes have been constructed and repaired to this end, she added.

Noting that works on the expansion of rail network are continuing, she said her government has been working to revive the rail links which were closed after the 1965 war between India and Pakistan.

Besides, the government is planning to introduce high-speed trains on different routes of the country, she added.

Referring to various initiatives of her government for the development of communication network by improving road, rail and river networks in the northern region, she said, every upazila of the region has now been connected.

While exchanging views with the cross section of people of Lalmonirhat, the premier said her government is establishing Bangabandhu Sheikh Mujibur Rahman Aviation and Aerospace University (BSMRAAU) in the northern district.

She hoped that helicopters, planes and fighter planes would be made in the aeronautical centre in Lalmonirhat in the days to come.