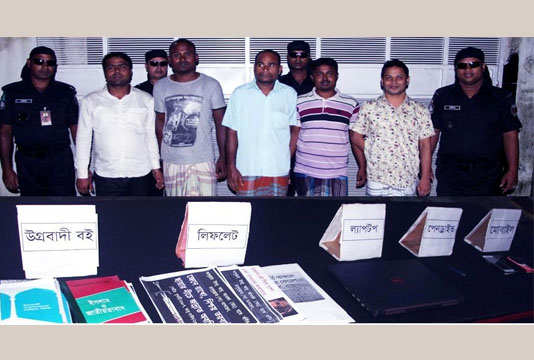 Rapid Action Battalion (RAB-13) arrested five extremist members of terrorist organisation ‘Allahor Dal’ from Alamnagar area in the city in the early hours today. “On a tip off, a special team of RAB-13 conducted a raid in the area and arrested the terrorists,” a press release issued by Media Officer of RAB-13 Major Galib Muhammad Natikur Rahman said here tonight.

The extremists gathered at Alamnagar for making plans to conduct extremist and subversive activities aiming at deteriorating the law and order situation and creating panic among common people. During primary interrogation, the arrested extremists admitted their involvements with extremist terrorism and they had plans for conducting
subversive activities on the day of the Holy Eid-E-Miladunnabi on November 10 next.