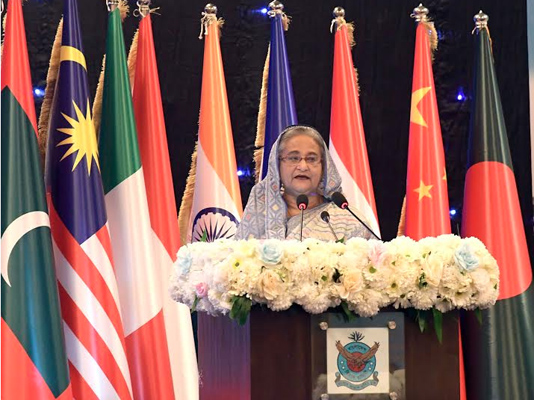 Prime Minister Sheikh Hasina today called upon the authorities concerned to ensure safe flying and maintenance of the aircraft in order for bringing down occurrence of airplane accidents, describing flight operating as a highly technical profession.

“You all must ensure utmost care for safe flying and maintenance of the aircraft purchased by hard-earned revenue and foreign currency,” she said while speaking as the chief guest at the closing ceremony of three-day 6th seminar on “International Flight Safety” at a city hotel.

Mentioning that there is no alternative to professional skills and honesty
to this end, the premier said: “Operating airplane is highly technical
profession in which expertise is a must. This professionalism brings
confidence for people concerned and simultaneously brings glory and honor for
the organisations.”

The premier expected that the participants of local-foreign as well as
military-civil agencies with their rich experience and knowledge gathered
from the seminar would be able to identify different challenges for improving
flight safety standards which help to curb airplane accidents.

“Our national agencies have been benefitted from the opinion exchange
programme, which would greatly help them to ensure flight safety in our
country,” she opined.

The theme of the sixth “International Flight Safety” seminar is “Team
effort can ensure Team Safety”.

Participants of 16 Air Forces from different countries of four continents
and representative from International Civil Aviation Organisation (ICAO) took
part in the seminar.

Referring to a recent survey of International Civil Aviation Organisation
on flight safety in which CAAB has obtained highest 75.46% marks among Asian
countries, Sheikh Hasina said, “Bangladesh Air Force and our civil aviation
authority are maintaining comparatively better and satisfactory standard in
flight safety in the region.”

Highlighting various projects taken by her government for the development
of civil aviation, the prime minister said, “We are implementing a project to
turn Cox’s Bazar Airport into an International one, expanding its runway into
12,000ft.”

She said the present government is going to construct one more
international airport in Bagerhat district, adding, “We are working to make
Saidpur Airport a regional hub for further strengthening connectivity with
neighbouring countries – India, Bhutan and Nepal.”

In this context, she also said, “After assuming office for the first time,
we have upgraded Sylhet and Chittagong airports as the international ones.”

Noting that her government has taken a number of measures to make air trip
accessible, comfortable and safe, she said “The government is constructing
third terminal at Hazrat Shahjalal International Airport. Upon completion of
the terminal, it will be possible to provide service to approximately 12
million passengers per year which is two and a half times more than that of
the existing capacities.”

“Our steps will provide comforts to air travelers and also help to create
new air routes in the days to come. As a result, we are optimistic for faster
growth of our tourism industry,” she stated.

Elaborating the government’s measures for the development of Bangladesh Air
Force dreamt by Father of the Nation Bangabandhu Sheikh Mujibur Rahman, the
premier said, “Our government is working hard to build the Air Force as a
strong force and also to modernize Biman Bangladesh Airlines through
purchasing state of the art fighter aircraft, aircraft, radar systems and
other complementary equipment in phases.”

Bangabandhu through his visionary and firm decision stepped up modernising
the nascent Air Force by including supersonic fighter aircraft MiG-21,
transport aircraft, helicopters, and air defence radar system, she stated.

The premier said, “During our government in 1996, we started modernizing
Air Force as a time-befitting force and undertook different programmes. That
time onward, we included Fourth Generation MIG-29 Fighter Aircraft, YAK-13,
C-130J transport aircraft, L-410 and AW-119 and AW-139 maritime search and
rescue helicopter into the Air Force. Later, we purchased two DC-10 aircraft
for inclusion in civil aviation sector in 1999 and 2000.”

“When we came into power again in 2009, we concentrated on capacity
building for manufacture, maintenance and overhauling of various types of
aircraft and other equipment,” she added.

“These most modern aircraft are suitable for carrying long distance
flights for example from Dhaka to New York, Toronto, Sydney etc. and we are
eager to do that. Keeping this in mind, our civil aviation authority has been
working faster to upgrade it as a category-1 authority,” she continued.

Mentioning that Bangabandhu Aeronautical Centre was established in 2011,
she said, “We are expecting that all types of aircraft both civil and
military will be fixed at this centre shortly. State of the Art 3D Helicopter
Simulator has already been inducted in BAF to ensure realistic training of
our pilots.”

“We are implementing the “Forces Goal 2030″ as a part of expansion and
modernization of the armed forces,” she further added.

Recalling the contribution of air force in 1971, she said, “Bangladesh Air Force was born on 28 September 1971. During that time, many civil pilots joined Air Force pilots and a special flying unit named ‘Kilo Flight’ was
formed then which contributed significantly during the Liberation War.” On establishment of an aviation university, the premier said, “We passed a bill in the parliament on Bangabandhu Sheikh Mujibur Rahman Aviation and Aerospace University on 28 February 2019.”

“We are going to establish the university in Lalmonirhat with a goal to develop skilled human resources in aviation sector…this institute will start its world class academic function shortly,” she added.