People couldn’t get much benefit from microcredit: PM 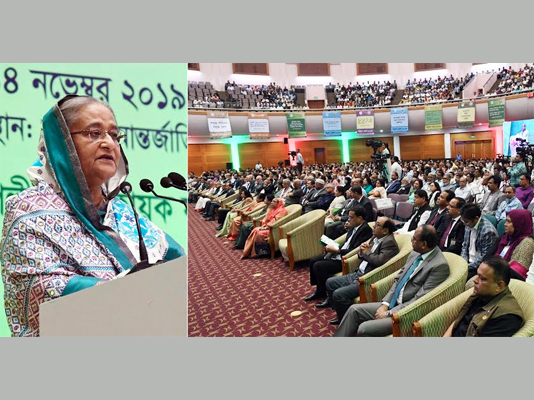 Prime Minister Sheikh Hasina today said some people have earned name and fame by introducing themselves as proponent of microcredit, but reality is that the people of Bangladesh could not get benefit to that extent through it.

“Once upon a time we saw that some people tried to take applause with microcredit and we had extended support to it as we thought the people will be lifted out of the poverty line,” she said.

The prime minister made the remarks while inaugurating ‘Development Fair-2019’ organised by the Palli Karma-Sahayak Foundation (PKSF) at Bangabandhu International Conference Centre (BICC).

The premier pointed out that Father of the Nation Bangabandhu Sheikh Mujibur Rahman had launched the microcredit scheme in the country after independence through Bangladesh Rural Development Board (BRDB) to boost production of agriculture products and market those properly by uniting the people through coooperatives.

In this connection, she said some people, however, have earned name and fame by introducing themselves as proponent of the microcredit. “But reality is that the people of Bangladesh couldn’t get benefit from it to that extent,” she added.

The PKSF has arranged the seven-day ‘Development Fair-2019’ with a view to expanding the market of products made by marginal people and participants of different programmes of PKSF.

Finance Minister AHM Mustafa Kamal was present as the special guest at the inaugural function of the fair, while PKSF Chairman Dr Qazi Kholiquzzaman Ahmad presided over it.

Ministers, advisers to the prime minister, parliament members, diplomats, distinguished persons and high civil and military officials were also present at the function.

At the function, lifetime achievement award was given to former agriculture minister Begum Matia Chowdhury for her outstanding contributions to the development of agriculture, ensuring welfare of the farmers and alleviating poverty.

Matia Chowdhury received the award — a citation, crest and a cheque of Taka 50,000 — from the prime minister.

Terming poverty as the main enemy of this region including Bangladesh, the prime minister called upon all to fight together against it.

“Our main enemy is poverty. So we’ve to fight poverty and free the people from it,” she said.

Mentioning that Bangladesh Awami League has been working for the wellbeing of the people, Sheikh Hasina said the government has adopted work plans to achieve its goal of eliminating poverty from the country.

“When we were in the opposition we also set the same target,” she said.

The prime minister said her government when first assumed office in 1996 had taken long, short and immediate work plans to achieve the goal.

“We enacted the fifth five-year plan and 10-year perspective plan and started their implementation to expedite the country’s development by alleviating poverty and disparity among the people,” she said.

Sheikh Hasina said after coming to power again in 2009, her government had framed the sixth five-year plan keeping consistency with the millennium development goals (MDGs).

The premier added: “We’ve been working to build a developed and prosperous Bangladesh by freeing it from hunger and poverty.”

Sheikh Hasina also said the government is undertaking every development scheme and step to make the uplift sustainable and achieve the SDGs.

The prime minister said Bangladesh was once identified as a country of drought, flood and hunger.

“But now none can look down upon Bangladesh as a poor country We have emerged as a respectable nation in the world due to massive development in the last one decade,” she said.

Spelling out her government’s various steps for the development of agriculture, Sheikh Hasina said the government provides all kinds of supports to the farmers.

In this connection, she mentioned opening of bank accounts by the farmers at only Taka 10, price reduction of agri inputs, including seeds and fertilizers, and reorganisation of the BADC.

The prime minister said the government has also given special attention to industrialization alongside the agriculture.

“We’re setting up 100 economic zones for further industrialization and generating employments … we have taken the initiatives so that none establishes mills and factories here and there by destroying farmlands,” she said.

Sheikh Hasina said the government has adopted a policy on using land so that none can destroy double and triple-cropped land.

“We’ve taken initiatives so that the policy becomes effective properly … none will get any facilities if he or she damages such croplands. We’ve to give proper attention to this end,” she said.

The PM said the government has ensured food security for the people of the country and Bangladesh is now self-reliant in food. “We’ve to keep up this achievement because we don’t want to move begging hands to others … we’re victorious nation and we want to move with dignity, keeping our head high,” she said.

Sheikh Hasina mentioned that Bangabandhu replied to the question of a foreign journalist, saying: “There are fertile lands and huge population in the country and we’ll build the country with these resources.”

The prime minister said her government is working following the policy of the Father of the Nation, and the countrymen are getting its benefits. “We’ve proved that we can,” she said.

After taking office, she said, her government had attached top priority to reducing poverty.

“Coming to power in 1996 after 21 years, we brought the vulnerable and disadvantaged people of the society such as elderly people, widows and women abandoned by husbands, and the physically and mentally challenged persons under social safety net programmes,” she said.

As a result, the rural and grassroots people are getting benefits from this programme, she said, adding they no more remain neglected in the family and society.

Sheikh Hasina also referred to various programmes taken by her government including Amar Bari Amar Khamar, Ghore Fera Programme for the slum dwellers, Ashrayan Project, and rehabilitation of the beggars and the river erosion-hit people.

The premier said the government is now focusing on ensuring nutrition for all. “It’s now important to create awareness about nutrition,” she said, praising the PKSF’s contribution to this end.

Sheikh Hasina said Bangladesh is now a “role model and wonder” of development in the world.

In this connection, the prime minister mentioned that world leaders in different summits wanted to know about the magic behind this rapid development of Bangladesh.

“My answer was clear that there is no magic. We love the country and people and we’re working devotedly for the development of the country. There are behind this success,” she said.

Sheikh Hasina said Bangladesh is advancing fast due to multifaceted programmes of her government. “None can pull the country back in future Insha Allah,” she said.

“Bangladesh has graduated to a developing country and we’ll advance further by keeping up this success and build Bangladesh as a most developed and prosperous nation in South Asia by 2041 Insha Allah,” she added.

The prime minister also highly appreciated the role of the PKSF in eradicating poverty and the country’s socioeconomic development.