Aman harvesting goes on in full swing amidst good yield 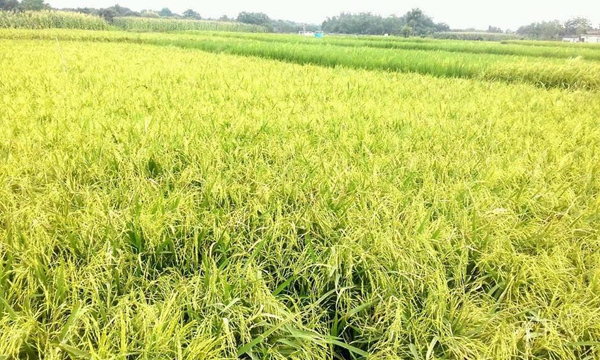 Harvesting of transplanted aman paddy is going on in full swing everywhere in the region including its vast tract at
present amidst good yield making the farmers happy. As the present time is appropriate for harvesting, farmers are now passing their busiest time with it aimed at completing it in due time to plant the next crop on the same land.

The paddy harvesting activities created employment opportunities for many needy people. Nazmul Hossain, 47, a farmer of Gohomabona village under Paba Upazila said he has got around six tonnes yield of Brri Dhan-75 variety per hectares of land this season. Another farmer Jahangir Alam, 54, of Bhujail village under Nachole Upazila has achieved yield from 5.5 to 6 tonnes of Brri Dhan-51 per hectares on an average.

Measures with initiative of both public and private sectors were taken to ensure supplementary irrigation to the paddy fields from the surface water resources if needed. The Barind Multipurpose Development Authority (BMDA) made arrangements of providing irrigation to more than 50,000 hectares of land in high Barind tract from canal water, said Engineer Abdur Rashid, Executive Director of BMDA.

He said farmers face a great water crisis in panicle initiation and pre- ripening stages of the farming that needs supplementary irrigation on an urgent basis due to rain-less condition in almost every year. But, fortunately, the farmers didn’t face any adverse situation. Surface water resources were also enriched through excavating canal to ensure supplementary irrigation to transplanted aman paddy, over 40,000 hectares of land in high barind tract, said Jahangir Alam Khan, Assistant Coordinator of Integrated Water Resource Management project.

Dev Dulal Dhali, Additional Director of the Department of Agriculture Extension (DAE) said the farmers of transplanted Aman are happy after pulling in a good yield in the region. He said the paddy farming has exceeded the target here significantly due to favorable weather along with frequent rainfall that contributed a lot towards successful completion of Aman seedlings transplantation on time.

Agriculturist Dhali said the farmers had cultivated Aman paddy on around 7.73 lakh hectares of land in eight districts this season against the DAE’s target of 7.24 lakh hectares creating hope of additional production of Aman paddy.

The varieties like Brridhan 51, Brridhan 56, Brridhan 66, Brridhan71, Brridhan75, Brridhan80, Brridhan87 and Brridhan90 are comparatively high yielding, drought tolerant and takes a short time to get matured than local
variety ‘Swarna’ which is prone to various diseases including brown plant hopper, he continued.

Dr Islam said farmers have been encouraged to cultivate the latest varieties through various interventions including block demonstration, plots projection and supplying of seed free of cost. He also said the modern varieties have opened up door in enormous prospects of food security along with mitigating the crises of irrigation water.