India to use Chattogram, Mongla ports on trial basis in January 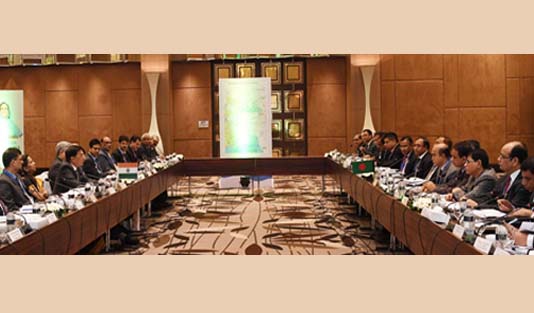 India will use Chattogram and Mongla ports for transshipment of goods on trial basis in January next as per the memorandum of understanding (MoU) signed with Bangladesh for carrying goods to and from India.

Shipping Secretary Md Abdus Samad stated this today at a press briefing after the end of a two-day shipping secretary level meeting between Bangladesh and India at a city hotel.

He said if the trial run becomes successful in two phases, India will regularly make transshipment while Chattogram and Mongla ports will realize charges and fees on transshipment goods as per respective usual tariff schedules.

Indian Shipping Secretary Gopal Krishna was present in the briefing.

At the briefing, secretaries of both the countries said they held discussion in a friendly and amicable atmosphere.

Bangladesh shipping secretary said they are trying to enhance the waterway connectivity between the two countries.

About allowing Bangladeshi crews to enter Indian ports, he said, currently two-three crews can buy medicines and daily necessaries in urgent need by entering Indian ports and this will continue.

“But, as there is a security matter, we have proposed of using QR (quick response) code in identity cards. The matter is under jurisdiction of the Indian home ministry,” he added.

The shipping secretary said they decided to make Jogighopa of India and Bahadurabad (Jamalpur) of Bangladesh as ports of call. Earlier, Chilmari was made port of call.

When Bahadurabad will be made port of call, those goods which will come from India and Bhutan can enter northern region through Chilmari and goods of other routes can come at Bahadurabad, he said.

He said customs duty will not be applicable for transshipment goods as Bangladesh and India both are signatories of General Agreement on Tariffs and Trade (GATT) but operational and service charge will be applicable.

He said both the countries will logically consider the issues discussed during the two-day meeting.