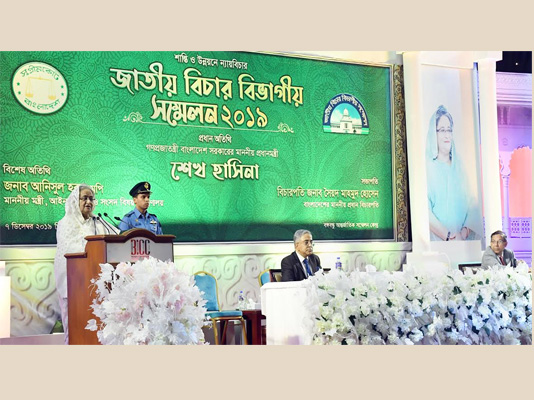 “I always believe the state organs — executive, legislature and judiciary — is inevitable for a state. These organs will run by their native laws. So proper coordination is necessary among them to ensure justice, peace and overall development,” she said.

The premier said this while inaugurating the daylong “National Judicial Conference-2019” arranged by the Supreme Court with the theme of “Justice for Peace and Development”, at Bangabandhu International Conference Centre (BICC) here.

She added: “We expect such a situation in where the state’s three organs won’t interfere the activities of others as it will hamper running the state smoothly, maintaining peace as well as ensuring justice and development.” The premier said the honourable President has formulated Warrant of Precedence and he has the only authority to change it, adding he (President) has also formulated the rules of business.

“No question can be raised in the court about the activities of the President in accordance with the articles 51 (1) and 55 (5) of the Constitution. But, sometimes, orders are seen giving on the issues under the jurisdiction of the President,” she said.

The premier hoped that the judges will work for ensuring the rule of law and justice as well with utilising their talents and creativity being responsible to the country, people and Constitution. She also asked the law minister to take prompt measures to establish the first ever law university in Bangladesh likewise other countries upon a proposal given by the Chief Justice.

Judges from the Appellate and High Court Divisions of the Supreme Court and
lower courts across the country attended it.

A video documentary marking the nation judicial conference was also
screened on the occasion.

Sheikh Hasina requested the judges to deliver the verdicts of lawsuits in
Bangla alongside English taking into consideration the poor knowledge of most
of the litigants in the foreign language.

“Because of poor knowledge in English, most of the litigants need to depend
on their lawyers to understand the verdict. The litigants have no scope to
know about the essence of the judgment and in many cases, they are harassed
for this reason,” she said.

“So, it’s crucial to publish the court judgment in Bangla alongside
English,” she said, adding the judges may write verdict in English, but there
should have a provision of publishing it in Bangla.

The premier stressed more effective usages of the mobile court as it has
been playing a vital role in checking various crimes such eve-teasing,
exercising unfair means in public exams, extortion, vehicle and environment
related crimes, price hike, and adulteration.

“If mobile courts are likely to be used in more effective manner, it would
be possible to maintain law and order, prevent crimes and protect public
interest,” she said.

She went on saying that the operation of mobile courts for trial of small
crimes could reduce pressure on the judiciary and thus, it could earn
confidence of the people as punishment is given to the wrongdoers on the
spot.

As many as 4,11800 mobile court operations have been conducted by which
10,10,334 cases have so far been disposed of and Taka 292 crore has been
realized as fine in the last 10 years, she added.

The premier said Bangabandhu got only three and a half years and during
that time he laid the foundation of all basic development of the country
including formulation of the Constitution.

The Constitution has ensured justice for people and thus the rule of law,
she said.

But, the assassination of Father of the Nation Bangabandhu Sheikh Mujibur
Rahman along with most of his family members on August 15 in 1975 stalled all
sorts of development process in the country, she added.

The premier however extended her thanks to the judiciary for delivering
the judgment in scraping the indemnity law paving the way of holding trial of
the assassination of the Father of the Nation.

In this context, she said they have been denied for justice for a long time
as she was not even allowed to file a case to seek justice of the murder, she
said.

After assuming office in 1996, “we rescinded the indemnity law and
initiated the trail,” she said, adding that the trail had been completed
while some of the accused had been hanged as some others are on the run.

The premier also expressed her gratitude to the judiciary as they termed
illegal the grabbing of state power by the military dictators after the
assassination of Bangabandhu.

In this regard, she said “The court verdict helps continue the democratic
trend in the country and expedite the country’s development freeing it from
stigma”.

Referring to holding quick trail of some sensational cases like the Feni
Madrasha student Nusrat killing, she said the confidence and trust of the
people on judiciary have increased through the verdicts.

Describing various measures taken by her government for the development of
the country’s judiciary to ensure rule of law and justice in the country, the
prime minister said her government appointed adequate judges and established
sufficient infrastructure for removing deficiency of enough court building
and judge’s residents across the country.

The premier has assured the judges of giving proper security as they have
risk in dealing with notorious criminals.

Sheikh Hasina said the residential complex was constructed considering the
safety and security of the judges.

She mentioned that her government enacted Legal Aid Services Act-2000
paving the way of getting justice for the helpless, poor, and under
privileged people.

Mentioning that Bangladesh has turned into a digital country, Sheikh
Hasina said introducing e-Judiciary system is important for the country’s
judicial process to remove backlog and procrastination of the cases.

The premier also said the trial of infamous criminals can be held through
virtual courts to lessen the risk of transportation of the criminals.

Sheikh Hasina said the e-judiciary will help the litigants get duplicate copies of verdicts without any hassle.

“We have already introduced the cause list through Digital Display Board in the Supreme Court and 13 districts. It will be introduced in all other districts in phases,” she continued.

Noting that a significant number of women judges have been appointed in the judiciary, the premier said her government had first given appointment of a woman in the apex court.

Spelling out the measures taken by her government to enhance the capability of the judiciary and reduce the crisis of necessary court rooms, the premier said that they have made extension of the district judge court buildings in 128 districts.

In this context, she said that a project has already been approved to construct and expand the Supreme Court building with necessary facilities.

The government has already approved the purchase of 128 vehicles for additional district and session judges.

The premier said her government is determined to ensure justice for all as it is necessary to achieve the sustainable development goals (SDGs).