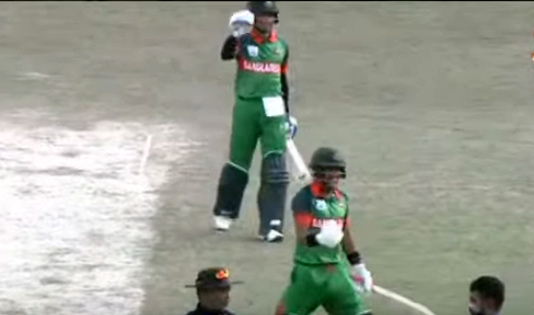 Bangladesh men’s cricket team (U-23) secured the gold medal in the 13th South Asian Games after crushing Sri Lanka (U-23) by seven wickets at Kiritpur, Nepal on Monday. The second gold in cricket took their tally to record 19 gold medals, bettering the previous record of 18 gold medals back in 2010 when Bangladesh was the host of the event.

In doing so, Bangladesh also bolstered their best SA Games performance outside the country. In 1995, Bangladesh had won seven gold medals in Madras SA Games, which was their best display abroad in regional Games. It was kind a sweet revenge for the men’s team, a U-23 team but mostly formed with national players, who suffered a shocking nine-wicket defeat to Sri Lanka on Sunday.

But in the crucial game, they didn’t make the mistakes as they demonstrated an all-round performance to get the better of Sri Lankan team. A solid bowling effort saw Bangladesh team to bundle out Sri Lanka for 122 in 20 overs after sending them to bat first.

Bangladeshi batsmen made a mockery with Sri Lanka bowling then to reach the target in 18.1 overs, making 125-3. Captain Nazmul Hossain Shanto led the charge in facile victory with 28 ball-35 not out, hitting two fours and one six. But the platform was set by the openers-Saif Hasan and Soumya Sakra, who combined for a 44-run to quell the apprehension of another upset.

Saif made 33 off 30 with three fours and two sixes while Soumya who wasn’t featured in the last day’s game against Sri Lanka made 28. Yasir Ali was the other notable scorer with 19. However the credit should go to the bowlers who gave the batsmen an easy target to achieve what they set prior to the Games.

Right arm medium fast bowler Hasan Mahmud, a regular face of Bangladesh Under-17 team, was the wrecker-in-chief with 3-20 in his four overs. His nagging line and length caused the havoc early in the Lankan innings from which they had never got away with.