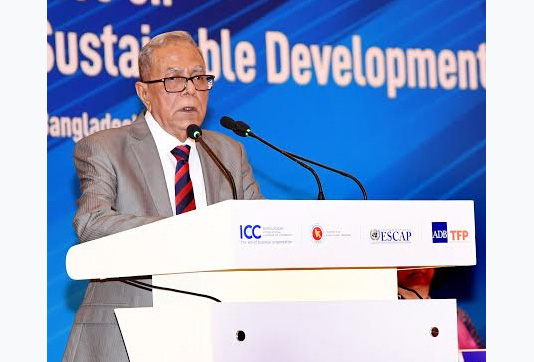 President M Abdul Hamid today urged investors and entrepreneurs to increase investment in Bangladesh, saying that such investments would help the country to fill up financing gap in attaining the Agenda 2030.

“Bangladesh has been working actively to attain the Agenda 2030 or Sustainable Development Goals (SDGs). More investments are needed as the main challenge for Bangladesh as well as other developing countries is to mobilize required financing,” said the President while addressing the opening ceremony of the Asia-Pacific Conference here.

International Chamber of Commerce, Bangladesh (ICCB) in collaboration with UN-ESCAP, ICC, ADB and FID organized the conference on “Financing Inclusive and Sustainable Development” as part of marking the ICC’s 100-year celebration.

The President urged for a mutual cooperation among the nations to be more active, adding that domestic resource mobilization coupled with enhanced participation of private sector and effective international development assistance can ensure the required financing.

“It is very imperative to ensure proper utilization of the resources in this regard,” said the President.

“Bangladesh welcomes foreign direct investment (FDI) . . . it wants to be an active partner in the world economic community,” he added.

The President said, “We are one of the most open economies among the developing countries and wish to continue the process. There are hardly any trade restrictions, tariff rates are being rationalized. We have very attractive and competitive incentive packages to promote the investment both direct and portfolio.”

President Hamid said the FDI has jumped by 58 per cent in 2018 from 2017 as Bangladesh has already created enabling and friendly environment for business and investment.

“Our investment, trade and industrial polices have also been aligned accordingly. To attract more and sustainable foreign and domestic investment, the incumbent government decided to setup 100 economic zones in the country,” he mentioned.

Being a fast growing emerging economy in this region, the President said, despite many hurdles Bangladesh has achieved significant success in attaining high GDP growth over the years, its poverty rate has been reduced significantly and also attained remarkable progress in UN Human Development.

Referring to various development plans of the government led by Prime Minister Sheikh Hasina, he said the government has taken up specific and integrated programmes to accomplish its goals of transforming the country into a middle income one by 2021 and a developed one by 2041.

At the very outset, the President paid profound respect to Father of the Nation Bangabandhu Sheikh Mujibur Rahman, the architect of country’s independence, to four national leaders, 1971 Liberation War martyrs.

He also recalled the contributions of the foreign friends and supporters who sacrificed their lives and provided their heartfelt support in the 1971 War of Liberation.

Meanwhile, former UN Secretary General Dr Antonio Guterres joined the programme through video conferencing. He read out a message wishing for the conference a successful event.

Visiting ministers, foreign delegates, business leaders, secretaries concerned to the President, and senior civil and military officials, among others, were present.