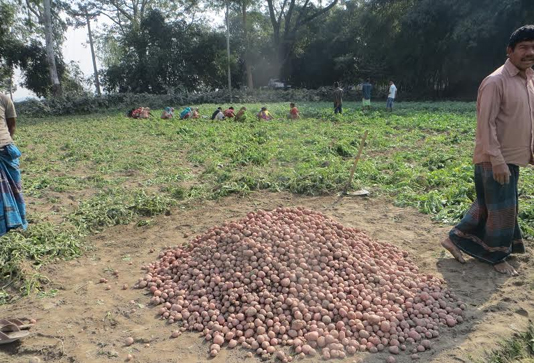 Farmers in the district are happy over bumper production and getting fair price by selling potato. The farmers have started harvesting early (Karage) variety potato from their respective lands with much enthusiasm. Per maund potato are being sold at Taka 1,000 to Taka 1,200. Traders have come from different district and are buying potato from the growers and sent those to Dhaka and other parts of the country.

Farmers said cultivation of early variety potato are gaining popularity in the district due to lower production cost. Zakir, a potato grower, said he cultivated of early karage variety potato on seven bighas of land this year and got 40 maunds potato from per bigha of land. He has got fair price by selling potato.

Zakir has got profit 1,80,000 Taka by selling potato after all production costs. Deputy Director of Panchagarh office of Department of Agricultural Extension(DAE) Md Abu Hanif said soil and weather condition in the Panchagarh district is very much favarable for potato cultivation.

The DAE sources said 2,000 hectares of land have been brought under early variety potato cultivation in the district. They have given necessary supports including agri-inputs to the farmers for boosting potato production.