Plots of ‘Pakistani-lovers’ will never be successful: PM 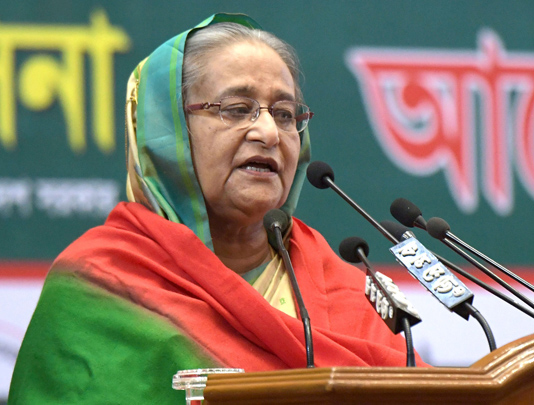 Prime Minister Sheikh Hasina today alerted the countrymen to conspiracies of the anti-liberation forces to foil independence and turn Bangladesh into a failed state, asserting that the plots of the “Pakistani-lovers” will never be successful.

“The collaborators of the Pakistani occupation forces and those who still love Pakistan are out to foil Bangladesh’s hard-earned independence and turn the country into a failed state. But we won’t allow their conspiracies to be successful,” she said.

The prime minister said this while taking part in a discussion at Bangabandhu International Conference Centre here this afternoon.

Bangladesh Awami League (AL) organised the discussion on the occasion of the 49th Victory Day.

Sheikh Hasina, also the AL president, said Bangladesh earned independence in exchange for blood of millions of martyrs. “They joined the liberation war responding to the call of Bangabandhu and struggled throughout their life for this independence … their sacrifice cannot go in vain,” she said.

The premier said Bangladesh fought and won the liberation war against Pakistan. “Our goal was that we’ll remain above Pakistan anyhow on all sides including economic, social and cultural fronts. We truly stay there,” she said.

She went on saying: “We are in a better position than everybody else. We must keep up this success.”

The AL president said wherever the Pakistani-lovers stay – in jail or abroad – their plots will be there.

“We’ll have to foil their conspiracies by remembering the words of the Father of the Nation that none could suppress seven crore Bangalees … we’re now 16 crore people.”

The prime minister said the Bangalee nation will move with dignity on the world stage by upholding the victory of the liberation war. “Our vow is to materialise the Father of the Nation’s dream of establishing a hunger and poverty-free Sonar Bangla,” she said.

Sheikh Hasina said there are few collaborators of Pakistan in the country. “But none could suppress us in the past and will not be able to do so in future also … we’ve proved it,” she said.

Referring to the assassination of Bangabandhu in 1975, the premier said the nation had to pay the price for failure to foil the intrigue.

Sheikh Hasina said the Father of the Nation was killed at a time when the country was marching towards economic development.

“Not only Bangabandhu, almost all of our family members were brutally killed on the day. The killers attacked the residences of my ‘baro fufu’, ‘mejo fufu’ and ‘chhota fufu’ (parental aunts),” she said.

The AL president wondered: “Such a big incident happened, nobody could know it and nobody could take any step! And why was his dead body lying at No. 32? I could not get its answer yet.”

Sheikh Hasina said Awami League is such a big organisation and it had so many leaders. “Where were they at that time? Nobody dared to come forward … sometimes I wish to know it,” she said.

The prime minister said the common people were with Bangabandhu. “Maybe the nation had to pay price for the failure,” she said.

Sheikh Hasina said after the assassination of the Father of the Nation 18/19 coups took place in the country and atrocities were unleashed on the leaders and workers of our party. “If anybody resisted with courage, such torture and coups might not occur time and again at that time,” she said.

The prime minister said the country was taken towards complete destruction through these coups. “Not only that, the non-communal spirit with which Bangladesh was liberated was destroyed,” she said.

The prime minister said after the assassination of Bangabandhu, the war criminals were put in state power after stopping their trial.

“The country’s non-communal ideology was trampled and economic progress was halted, while efforts were made for 21 years to make Bangladesh a failed state,” she said.

When the Awami League assumed office after long 21 years, the people were able to hear the March 7 speech of the Father of the Nation, the premier said.

Highlighting the country’s tremendous socioeconomic development in the last one decade, the prime minister said the people of the country only get service from the Awami League and the party can ensure their welfare.

“We’ve been able to bring down poverty rate to 20 percent from 41 percent during the time and increased GDP rate to 8.15 percent,” she said.

The premier added: “We want to cut the poverty rate by at least one percent less from the country which predicted that Bangladesh will be a basket case after independence.”

Sheikh Hasina urged the Awami League leaders and workers to work for the welfare of the people.

“You don’t think whatever you got and didn’t get in your life, rather you’ve to think that whatever you served to the people,” she said.

“Nobody can take money and wealth to the grave but earning money is an addiction and the people chase for it like a blind. As a result, the family is destroyed and the children are derailed,” Sheikh Hasina added.

The AL president said the country is developed if anybody is freed from this incurable disease and he or she is devoted to the country and it is a reality.