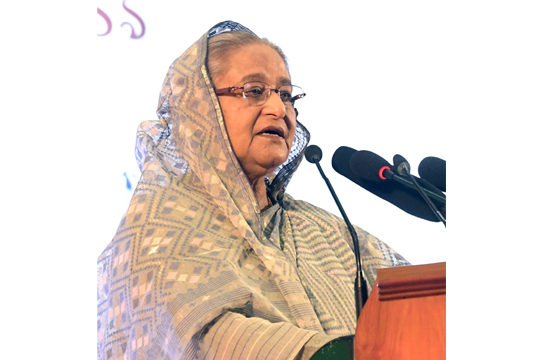 Prime Minister Sheikh Hasina today urged foreign countries where Bangladeshi expatriate workers are being taken, to take appropriate measures so that they are not exposed to fraudulence. “I request the countries where the Bangladeshi workers are being taken to initiate appropriate measures to stop recurrence of fraudulence victimizing our workers,” she said while inaugurating the World Migrants Day at the Bangabandhu International Conference Centre (BICC) here.

The premier simultaneously asked foreign-bound workers to become aware against fraudulence as many of them were going abroad by selling their lands and properties for an overseas job.

“I urge all to be aware about the fraudulence. The people are even sending their wives alongside their sons and daughters after being allured to get good jobs abroad. Many incidents of selling own wives have even happened. It is very regretful,”

She sounded a note of warning saying, “We will take appropriate measures against those (recruiting agencies) who are involved in the misdeeds.” The premier called upon the Bangladeshi overseas jobseekers to receive
proper training before going abroad as it is very much essential.

“It’s very unfortunate that the people who want to go to abroad with a job are less interested to receive training. They fall in danger after going abroad due to lack of skill,” she said. The prime minister said her government has been providing training to the people intending to go abroad with jobs.

She said many people fell prey to the danger for not getting appropriate training. “It’s very regretful and it needs to be addressed.” The Prime Minister asked the overseas jobseekers to verify job, salary and
security measures properly before going to any country as there is registration system here in Bangladesh now.

In this regard, she also urged all of the country’s rural areas to be careful so that none can fall victim of such fraud. In the function, the Prime Minister inaugurated the insurance coverage system for migrant workers and handed over the insurance policy to an overseas jobseeker.

She also handed over cheques of stipends to two meritorious students as part of the distribution of some Taka 4.5 crore as stipends to 3,225 meritorious children of migrant workers. Besides, Sheikh Hasina provided Commercially Important Person (CIP) awards to two non-residents Bangladeshis (NRB) as the government conferred the CIP
awards to 42 Bangladeshi expatriates on the occasion of the International Migrants Day 2019. Later, the Prime Minister opened the migration fair at the venue.

Sheikh Hasina urged the overseas jobseekers to get their names registered through 5,275 digital centres and 8,000 post offices so that they do not fall prey to fraudulence.

The premier asked the Expatriates’ Welfare and Overseas Employment Ministry to take care of the matter with special attention.

Referring to the introduction of the smart card for the expatriate Bangladeshi workers, she said, “Due to the record on the smart card, worker’s embarkation cards are automatically printed at the airport. As a result, harassment of the workers at the airports has stopped largely.”

In addition, pre-departure and fingerprint training works have been decentralized in 25 districts to ease the services for migrant workers, she said.

“If necessary, the monitoring will be scaled up further to stop harassment of the migration workers as some airport employees have the mentality to earn some money from the migrant workers who return home from abroad,” she said.

Noting that the Probashi Kallyan Bank established by the government aims at providing financial assistance for overseas employment, export of manpower and expanding investment facilities in the country by the expatriate Bangladeshis, she said, “The overseas job seekers can take loan from the bank to go abroad and for initiating their business after returning home.”

Highlighting various pragmatic initiatives taken by her government to expand the overseas job market, Sheikh Hasina said, “A separate labour market research cell has been set up in the Ministry of Expatriate Welfare and Overseas Employment to explore and expand the labour markets.”

The premier said at the same time steps have been taken to ensure migration and honourable employment for the overseas workers.

She added, “A joint initiative has been taken with Saudi Arabia and Hong Kong to give proper training to the Bangladeshi workers.”

“The Bureau of Manpower Employment and Training (BMET) has been given the responsibility of creating skilled manpower for overseas employment. As many as 6.82 lakh employees have been trained in 55 trade courses in six institutes of marine technology and 64 technical training centres across the country,” she said.

The government has taken initiatives to set up a technical training centre in each upazila of the country. The premier said, “The operation of 41 training centres has already started while 50 others will start their operation soon.”

In order to make BMET’s technical training centres of international standard, 357 trainers from these centres have been trained abroad, she added.

Noting that her government has declared this sector as a ‘Thrust Sector’, giving immense importance to overseas employment, Sheikh Hasina said that they have been working to send 1,000 men or women on an average from every upazila every year.

Noting that the government has also taken various institutional measures to facilitate remittance sending through the legitimate channels, the prime minister said, “A two percent cash incentive has been offered from the current fiscal year to encourage remittance sending through the legitimate channels. For this, there has been an allocation of Tk 3,500 crore in this year’s national budget.”

She said remittances sent by the expatriate Bangladeshis continue to contribute significantly to the country’s socio-economic development, including eliminating unemployment and increasing foreign exchange reserves alongside helping in alleviating poverty. The premier said the government has already finalized legal and policy frameworks to facilitate safe, regular and responsible migration in line with the Sustainable Development Goals.

In order to protect the migrant workers and their families, the premier said the Wage Earner’s Welfare Board is providing death-related compensation, medical grants, assistance to return and scholarships to migrant workers’ children.

“From this year, the overseas workers are being covered under low cost insurance. Half of the insurance policy value is being paid by the government. It is hoped that the safety of migrant workers will be ensured,” she said. Spelling out the massive development works carried out by her government, the premier said significant progress has been made in poverty reduction in Bangladesh in the past decade.

The premier urged all concerned, including Bangladeshi migrant workers, to brighten the country’s image abroad and work from their respective positions to build a hunger-and-poverty-free ‘Sonar Bangla’ as dreamt by Father of the Nation.