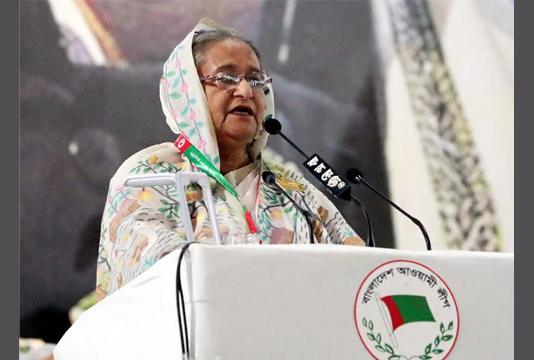 Prime Minister Sheikh Hasina today described Bangladesh Awami League (AL) as the country’s “biggest and strongest” political party, urging its leaders and workers to be psyched up with principle and ideology.

“Principle and ideology are the biggest words for any political leader. So he or she will have to remain prepared for making any sacrifice for maintaining principle and ideology,” she said while inaugurating the AL’s 21st National Council at the historic Suhrawardy Udyan here this afternoon.

The premier asked the party stalwarts to stay ready for making sacrifice to enable people getting adhered to principle and ideology for achieving anything great.

Sheikh Hasina, also the president of AL, added that those who could make such a sacrifice become successful and could give something to the country and the nation.

Quoting a comment of Bangabandhu, she said temporary benefits are achieved if any party moves with leaders without principles. “But those leaders are not found during any struggle — it’s the biggest reality,” she said.

The premier said the Awami League is that organisation which made sacrifice time and again. “The people of Bangladesh today got its fruits, and today’s Bangladesh is advancing towards the path of development and prosperity which Bangabandhu dreamt of,” she said.

Sheikh Hasina said that Bangladesh is moving ahead and it will continue to advance further, asserting that none will be able to play ducks and drakes with the people of the country.

“In this council, it’s our pledge to build a hunger and poverty-free Sonar Bangla as dreamt by Bangabandhu Insha Allah,” she said.

Earlier, the prime minister opened the two-day triennial council of the party which waged the Bengali nationalist movement nearly seven decades ago and subsequently steered the country’s 1971 Liberation War, by hoisting the national flag and releasing balloons and pigeons at the venue, the site of Bangabandhu’s landmark 7th March address and surrender of Pakistani troops in 1971.

AL General Secretary Obaidul Quader and the presidents of AL’s 78 organisational districts raised the party flag and the national anthem was sung on the occasion.

The theme of the council is “On the way to implement Bangabandhu’s dream of Sonar Bangla under Sheikh Hasina’s leadership, being advance irresistibly: We are Bangladesh”.

Sheikh Hasina mentioned that Bangabandhu used to say that leadership comes through a process of struggle and none can become a leader suddenly and in a day.

The prime minister said Bangabandhu had liberated the country through struggle and encouraged the people in the struggle for independence. “Bangabandhu was established as an undisputed leader through this struggle,” she said.

Sheikh Hasina said Bangabandhu made struggle throughout his life for bringing smiles on the faces of the distressed by giving a better life to them and building a hunger and poverty-free non-communal society. “He chose the path of struggle to achieve the goal,” she said.

Sheikh Hasina said the Father of the Nation was arrested in false cases and suffered rigorous imprisonment years after years without any trial while protesting against the injustice of the then governments.

“But Bangabandhu never left the path of welfare of the people and he was always ready to make self-sacrifice for the people of this Bangla … he moved with a principle and an ideology,” she said.

Quoting another remark of the Father of the Nation, the premier said: “We’ve to establish our language, literature and tradition at home and abroad if we want to raise our head high in the international arena.”

“We’re a Bangalee nation and we’ve a national entity, tradition and culture and also have own language … we want to put the Bangalee nation on the dignified seat on the world stage and we’re doing politics to achieve the goal,” she said.

Sheikh Hasina went on saying: “So I would like to request every leader and worker of the party to work with that thinking and spirit.”

Noting that the aim of the Awami League is to strengthen the organisation from the grassroots level, the AL president said councils of 29 districts have so far been held but the councils of the remaining districts could not be arranged as “December is the busiest month for us.”

“We will hold councils of the rest of the districts as well as unions and upazilas … through the council, the organisation becomes more vibrant and stronger and we want to build organisation in that way,” she said.

Pointing out that the Awami League was not established by remaining in power, Sheikh Hasina said the party launched movement and struggle since its inception for establishing the rights of the people.

“The Awami League was founded to bring smiles on the faces of the common people,” she said.

The premier said ill attempts were made by Yahya Khan, Ayub Khan, Ziaur Rahman, HM Ershad and Khaleda Zia to destroy the Awami League. “The Awami League sustained temporary damages for it, but none could completely finish or destroy the party as it was established at the hands of the Father of the Nation,” she said.

The prime minister accused Ziaur Rahman of his involvement in the killing of Bangabandhu and said the military dictator grabbed power illegally by violating constitution. “General Zia tried to take the country completely out of the spirit of the Liberation War,” she said.

Sheikh Hasina said BNP was founded by leftovers of the power and it cannot do any welfare of the country.

“Bangladesh became champion in corruption for five consecutive years when the BNP was in power and the party was indulged in unbridled terrorism, corruption, militancy, grenade attacks and money laundering during the period,” she said.

The prime minister said General Zia and Khaleda Zia destroyed the spirit of the Liberation War by halting the trial of war criminals and rehabilitating them in politics.

Highlighting Bangladesh’s tremendous development in the last one decade, she said Bangladesh has graduated to a developing country from the least developed one. “We’ve to keep up the success,” she said.

Referring to Bangabandhu’s strides for establishing Bangladesh as a developed and prosperous country, the prime minister said he took many historic steps for rebuilding the war-ravaged country and put Bangladesh into a dignified position of the world.

“Bangladesh would have been established as a developed and prosperous country much earlier had he (Bangabandhu) been alive,” she said, adding that through his killing, the spirit of the Liberation War was pushed far away.

The prime minister also remembered with profound respect the 30 lakh martyrs, and the repressed mothers and sisters of the War of Liberation, martyrs of the August 15, 1975 carnage and grenade attacks of August 21, 2004.

Sheikh Hasina paid tributes to those who had contributions to strengthen the Awami League after facing different hurdles since the party’s inception.

The prime minister greeted the party leaders and workers and the countrymen on the occasion of the 21st national council of Awami League.

AL’s Office Secretary Dr Abdus Sobhan Golap read out an obituary reference on the deaths of AL leaders, national and international personalities, and others who died in different accidents and natural disasters since the last council of the party.

At the beginning of the first day’s council, a colourful cultural function titled “Tomaroi Joy Hok” was staged under the supervision of the cultural sub-committee of the party.

Through the nearly 45-minute cultural function, the history of the 1952 Language Movement, the Liberation War of 1971, achievements of the Awami League governments led by Father of the Nation Bangabandhu Sheikh Mujibur Rahman and his able daughter Prime Minister Sheikh Hasina were projected.