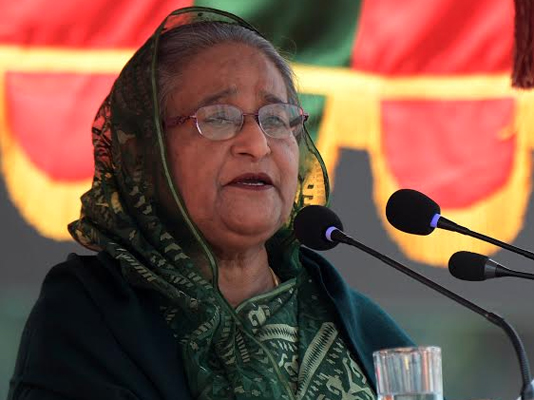 The premier simultaneously said after assuming office her government established newer military units including new infantry divisions, brigade unit and training institutes as well for overall development of the army.

She said this while addressing a ceremony as the chief guest at the parade ground of the Bangladesh Military Academy (BMA), Bhatiary, Chattogram marking the President Parade 2019 of the passing out cadets of the 77th BMA Long Course.

The premier said Bangladesh Army should always be well-trained and equipped with modern knowledge, adding, “We are taking measures keeping this in mind.”

She also said that her government has ensured inclusion of women in Bangladesh Army.

The premier asked the cadets to obey the seniors and take special care of their subordinates following the order of Father of the Nation Bangabandhu Sheikh Mujibur Rahman and the oath they are taking.

In this context, the premier quoted some portion of the invaluable and visionary speech of the Father of the Nation delivered at the passing out of cadets at the BMA in 1975, “I, as the Father of the Nation, order you to stay on the way of honesty and love the country. Stand beside justice, obey the guardians, keep up discipline, and thus you will be the human being.”

The premier told the cadets that you would have to remain alert always while discharging duties.

Referring to applauds achieved by the Bangladesh Army through its activities, the premier said, “Our armed forces have been working at various missions of the United Nations with due competence and it is applauded wherever it goes.”

Noting that today is a memorable day for the Bangladesh Military Academy, the premier said that the trainees from Bangladesh as well as friendly countries such as Saudi Arab, Palestine and Sri Lanka are going to be commissioned today as lieutenants after completing the three-year 77th BMA Long Course.

Greeting the cadets of the BMA, the premier said, “The necessity of army for an independent and sovereign country is immensely needed and inevitable.”

Therefore, Father of the Nation Bangabandhu Sheikh Mujibur Rahman inaugurated the Bangladesh Military Academy at Cumilla Cantonment in 1974 in a war ravaged country aimed at developing Bangladesh Army as a trained, strong and efficient force and that was a historic and epoch-making matter as the academy was established in a war-ravaged country with limited resources.

She said today’s military academy is like the outcome of the dream of Father of the Nation, adding that the world now praises the academy and the armed forces officers are taking training here.

The premier said, “We have adopted the “Forces Goal 2030” in accordance with the “Defence Policy” adopted by the Father of the Nation.”

In light of the policy, she said, the Awami League government has been taking necessary measures, including setting up of a new infantry division.

She mentioned that today’s Bangladesh Army is much more developed, self-reliant, efficient and professional in terms of infrastructure, strategy and technology in comparison to any time in the past.

The premier said that her government has been working for turning Bangladesh Military Academy into an ultra-modern and international standard institution while the Bangabandhu Complex has been built with all kinds of modern facilities in the academy.

Besides, she said that four-year honours and engineering degree on various subjects have been introduced in the academy whereas the duration for cadets to be commissioned has also been increased to three years from two years.

The premier called upon all to accomplish their respective duties sincerely to make Bangladesh a developed and prosperous country.

“Our economy is strong enough. So, we want to build our country by ourselves and it is the duty of all to work from their respective positions with sincerity to build the country as a developed and prosperous one,” she said.

The poverty rate has been brought down to 21 percent from 82 percent while the GDP growth rate increased to 8.15 while the per capita income has also increased.

To materialise the dream of the Father of the Nation to build a hunger- and poverty-free Sonar Bangla, the premier said her government has taken 100-year-long programme like Delta Plan-2100 as the generation after generation will get a prosperous and developed country.

She added that Bangladesh is set to celebrate the birth centenary of the Father of the Nation in 2020 and the golden jubilee of Bangladesh’s independence in 2021 and 2020-2021 has been declared as the “Mujib Borsho.”

“Insha Allah, Bangladesh will definitely be prosperous and free from poverty and hunger as dreamt by the Father of the Nation, “she added.

The premier earlier distributed various prizes among 265 promising young officers who are stepping out of the Academy and entering into army career after successful completion of the course.

Of them, 234 are from Bangladesh including 27 women, 29 from Saudi Arabia, one each from Palestine and Sri Lanka.

Battalion senior under officer of the 77th BMA Long Course Sabir Nawaz Shaon has been awarded with the decorated “Sword of Honour” as the best all round cadet.

Besides, company senior under officer Md Barkat Hossain has got the “Army Chief Gold Medal” award for his best performance in the military subjects.

The cadets also took formal oath on the occasion.

Bangladesh Army arranged a spectacular parade marking the occasion which the premier inspected from an open jeep and took salute.

She also joined an epaulette wearing ceremony and joined a photo session with the fresh army officers.

Cabinet members, chiefs of the three services, lawmakers, diplomats of foreign missions in Dhaka, political leaders, distinguished personalities, and high civil and military officials were present on the occasion.

Earlier on her arrival at the Academy, the prime minister was received by Chief of Army Staff General Aziz Ahmed.