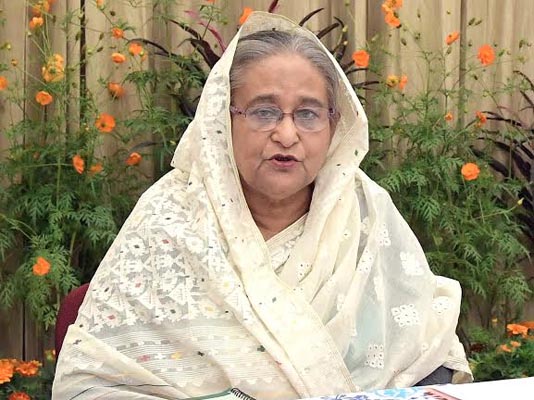 The premier added that her government has been working for overall development of the education system to keep that in mind. The prime minister said this while formally inaugurating the free textbook distribution programme and receiving the results of this year’s Primary Education Completion (PEC), Ebtedayee, Junior School Certificate (JSC), Junior Dakhil Certificate (JDC) and equivalent examinations at her official Ganabhaban residence here this morning.

Sheikh Hasina formally opened the free textbook distribution programme by handing over books of primary and secondary levels to students. About introduction of PEC, JSC and other equivalent examinations, she said these exams helped children raise self confidence by removing fear about public examinations.


She added that the PEC, JSC and other equivalent examinations were introduced as there had been scholarship examination for some selected students of class five and eight.

The prime minister said her government has given the highest importance to education for building a developed and prosperous nation dreamt by Father of the Nation Bangabandhu Sheikh Mujibur Rahman and said “An educated nation is necessary to build a poverty free country and no nation can be reached in a dignified position without education.”

She said her government has been doing everything necessary for creating an educated generation to advance the country towards desired target of making Bangladesh a prosperous and developed one.

Terming education as an asset, Sheikh Hasina advised the students to develop themselves as well-educated ones alongside.


She mentioned that her party formulated education policy in accordance with the policy by the Qudrat-e-Khuda Education Commission at the directive of Bangabandhu. Besides, she said, steps have been taken to distribute free textbooks, provide the students with stipends and introduce school feeding program, while multimedia classrooms have also been set up at their schools and colleges.

Stressing the need for attaining technical and technology-based education, she said, steps have been taken to make life of the future generations more beautiful to this end.

Sheikh Hasina said, today’s children are very meritorious and her government wants to develop the children in such a way so that their latent talents can be flourished properly.


The prime minister said the present government has been working to develop the education system more modern and time befitting one to teach the students in more up-to-date process.

She also advised the students to get involved in various extracurricular activities like sports and games and cultural events alongside their regular academic studies.

Sheikh Hasina said the country’s independence was achieved in exchange for blood of three million martyrs, adding, “The blood doesn’t go in vain.”

The prime minister also reiterated her determination to establish Bangladesh as a dignified nation on the world stage. “We want to move keeping our head high, not begging to others,” she said.

Earlier, the prime minister received summery of the results of JSC, JDC as well as PEC and its equivalent Ebtedayee examinations.


Education Minister Dr Dipu Moni and State Minister for Primary and Mass Education Md Zakir Hossen handed over the summery of the results of their respective ministries to the Prime Minister.

The chairmen of eight general education boards and the madrasa board also separately handed over the JSC and JDC exam results of their respective boards to Prime Minister Sheikh Hasina.