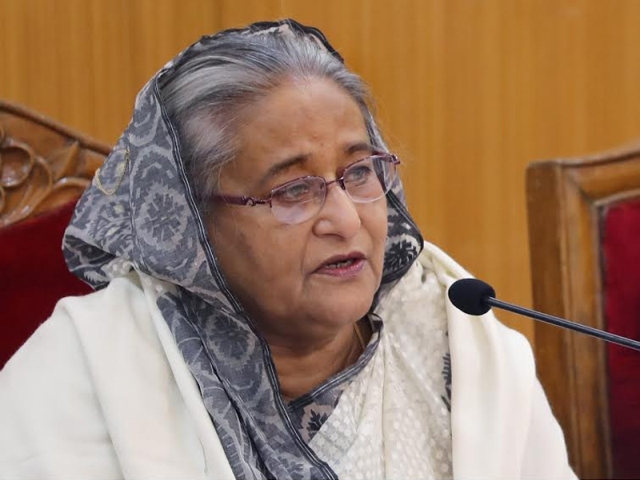 “A government can work smoothly and successfully at the time when its party remains well-organised and it is regarded as the huge power for the government,” she said. The premier simultaneously asked the AL leaders and activists particularly the new central leadership elected after its 21st national council on December 21 last to work with sincerity for developing the party more well- organised accordingly.

She was speaking at the maiden joint meeting of the AL’s new central executive and advisory councils at the party’s central office at Bangabandhu Avenue here.


She said, “The power of a well-organised party is required mostly in making a country developed one. I personally realise it and for that reason, I always put emphasis on the party (organization).”

Members of the party’s central executive and advisory councils were present at the meeting presided over by AL President Sheikh Hasina.

The meeting was adjourned till 6pm tomorrow.

Noting that assassination of Bangabandhu along with other AL leaders aimed at keeping AL away from the state power, Sheikh Hasina said, “There was a target to destroy the Awami League in such a way that it never can assume power or take over the charge of running the state. But they (conspirators) didn’t succeed in doing so.”


The premier gave the credit to grassroots leaders for the survival of the party saying, “Grassroots leaders and activists of the Awami League always take the right decision and even they keep the party above all dedicating their lives.”

She continued: “Today, Awami League is a strong party. Awami League is the party which taught political lessons to others party and it has been doing it since its formation in 1949. We will have to keep up the tradition of the party in the days to come.”

The premier said those who assumed power through assassination of Father of the Nation Bangabandhu Sheikh Mujibur Rahman in 1975 never believed in the liberation of the country.

She went on saying, “They (Who don’t have belief in independence) always tried to make the country a failed state which was their main target.”

But, the Awami League’s target was to prove that the hard earned independence that was achieved through 24 years long struggle and the Liberation War with the supreme sacrifice of three millions people and at the cost of two lakh women’s chastity under the dynamic leadership of Bangabandhu must not go in vain, she said.


“I can say it without any hesitation that we have proved that,” the premier said, promising to work to keep it up.

Noting that the AL formed the government in 1996 after crossing many hurdles, Sheikh Hasina said, “The people of the country have seen the first ray of hope with Awami League assumed office and first realized that the government is public servant.”

She added: “We have completed 11 consecutive years (in power). —we have earned people’s confidence and trust that they believe that development only happens whenever the Awami League is in power.”

The premier said the example which her government set in terms of carrying out development of the country is now appreciated not only in Bangladesh but also in the globe.

The development of Bangladesh, she said is befitting reply to the people who used to say Bangladesh would be a bottomless basket after achieving independence, adding, “They now cannot say that as today’s Bangladesh is a role model for development (for the word).”


Sheikh Hasina coming down heavily on the BNP-Jamaat government for doing nothing for the country and its people rather indulged in money laundering and corruption to make their own fortune calling them smarter than the AL, saying, “The Awami League has proved that only this party can make development of the country.”

In this context, the premier said that she had heard lots negative remarks about the AL after returning home and taking charge of the party as president in 1981 that her party was not modern and smart and there was no educated people so it could not do this and that.

“The people who came to power claiming them smart only utilized the power to loot (government exchequer), resorted to money laundering and corruption. Their smartness was limited to make money for their own. But, the people of the country could not get anything from them.”

She continued the AL has proved that they can take the country forward towards development and prosperity and it is the AL which first used the modern technology.

The premier described the year 2020 as very important one for Bangladesh as the country is set to start the birth centenary celebration of the Father of Nation from January 10 next as Bangabandhu returned the country on that day in 1972.


The premier said the birth centenary celebration of Bangabandhu will be held round the year at home and abroad by the government, the party, the people from different strata of lives, various social and cultural organizations, missions abroad and many countries.

“With celebration of the birth centenary of the Father of the Nation, we will turn Bangladesh, which was given by Bangabandhu, into a more developed and prosperous one alongside making the independence more meaningful,” she said.

The premier said they have been working to increase the honour Bangladesh is now enjoying due to huge development works carried out by her government as the people of the country can roam around the world keeping their head high.
(BSS)